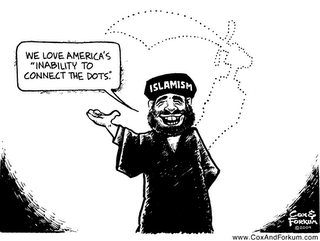 JoshuaPundit: One thing I’ve consistently said whenever we’ve experienced terrorism on our soil since 9/11; you’ll almost always find a Saudi-funded mosque and a radical imam in the mix.These things don’t come out of thin air.

In taking a look at the Boston Marathon bombers, one thing the media is attempting to gloss over is the connections between the brothers and radical Islamism.It turns out that Tamerlan Tsarnaev, the now deceased older brother who appears to have led the bombers was a member of the Islamic Society of Boston.

A story that’s being pushed in the media, when the ISB is mentioned at all is how Tamerlan Tsarnaev was reputedly ‘kicked out of the mosque’ for an angry tirade against the Imam for preaching a sermon telling his congregants to emulate Martin Luther King Jr.
The ‘source’ for this Arabian Nights tale is an anonymous Muslim worshiper in the mosque who would only give his name as ‘Muhammed.’

The story goes on to mention in passing that Tamerlan was readmitted to Friday prayer services.
As we’ll see, it’s highly unlikely that a sermon would be preached in this particular mosque using Dr. King as a role model.
The Islamic Society of Boston is a place I know of by repute.

The mosque is very much Muslim Brotherhood oriented, and claims the Muslim Brotherhood’s spiritual leader imam Yusef al-Qaradawi as it’s major influence and spiritual guide. One of its eight founding members was Abdurahman Alamoudi, who was jailed for 23 years in 2004 for material support of Islamist terrorism and money laundering.

In fact, the Society used Qaradiwi’s name in their fundraising and had al-Qaradawi as an honorary member of the board.
You’ve heard me mention al-Qaradawi before. He has some interesting views.

He favors a world-wide Islamist caliphate under sharia law, including the beating of ‘disobediant’ women, female genital mutilation , and death for homosexuals and apostates, just as it says in the Qu’ran.

He’s also called for a second Holocaust against Jews, saying, "Throughout history, Allah has imposed upon the [Jews] people who would punish them for their corruption. The last punishment was carried out by Hitler. G-d willing, this time it will be the believers."

And while the ISB has made a few statements publicly distancing themselves from Qaradawi, they have never distanced themselves from his theology. Literature found in the mosque, speakers who’ve been invited guests , writings and speeches of people intimately associated with the mosque and transcripts of a number of sermons preached there confirm that the Islamic Society of Boston remains very much a Muslim Brotherhood hardline mosque.

The ISB has been noted in the past for nuisance lawsuits designed to silence anyone who pointed out the mosque’s ties to the Brotherhood, the establishment of the mosque with Musim Brotherhood and Saudi funds, and the mosque’s fund raising for ‘charities’ like the Holy Land Foundation and the Benevolence International Foundation, both of which were essentially money laundering outfits for the benefit of groups like Hamas and al-Qaeda, and both of whom were subsequently shut down by the feds.

Among others, the ISB sued terrorism expert Stephen Emerson, The Boston Herald, Charles Jacobs, co-founder of the David Project and the American Anti-Slavery Group, and the local FOX news channel. The ISB claimed it was libeled.

Unfortunately for the ISB,the lawsuits proceeded to the discovery phase and bank records and other documents showed that not only had the mosque acted as a fundraiser for the Holy Land Foundation and the Benevolence International Fund, but that the mosque was funded almost entirely by Saudi and Brotherhood funds to the tune of over $7 million.

Another thing that surfaced in discovery was the way the ISB obtained the land to build its mosque.

The ISB was built on land owned by the City of Boston that was valued at $1.5 million at the time. It was gifted to them in a murky process by Mayor Menino, who spoke at the ribbon cutting ceremony. The deputy director of the Boston city agency that ‘negotiated’ the land giveaway not only was a member of the Boston Islamic Society whom it paid to raise money in the Middle East, but also secretly advised the group about obtaining the land cheaply. Aside from being an illegal conflict of interest, this was a clear violation of the establishment clause of the First Amendment, using public funds to favor one religion over all others…at the expense of the City of Boston’s taxpayers.
Discovery revealed that the ISB had attempted to delete all e-mails and documents relating to the land deal.

While we’re trying to digest how home grown jihad happens, we’d do well to take a much clearer look at the places it incubates.

Glenn Beck: “After what I have learned this week I’m a changed person.”

Somewhere along the way we lost our common sense and ability (or interest) to connect the dots!

Did Big Sis lie when she testified before Congress, last week?

Boston Marathon Bombing Suspect Identified: Video, Photo Images of ‘Dark-Skinned’ Suspect Found – Fox News Confirms That an Arrest Has Been Made… Or Not??

REPORT: Saudi Student -- 'Person of Interest' in Boston Bombings -- To Be Deported...

Obama meets with Saudi foreign minister; not on public schedule...

Let’s hope the Boston Marathon bomber is a white American

MANHUNT: Boston Terror Suspect Dead, the Other on the Loose in Watertown (Check Back for Updates)

Who are the brothers accused of the Boston Marathon bombing?

More background on Boston Jihad Bomber: "When we consider prophet Muhammad (s.a.a.w) [may Allah pray for him] as our role model, that’s when we achieve true success and a path to Paradise"

Sacrificing Freedoms is never the answer!! – “He who choses security over freedom (or liberty) rarely gets either!” …Benjamin Franklin

I am a babyboomer and empty nester who savors every moment of my past and believes that it is the responsibility of each of us in my generation and Americans in general to make sure that America is as good or even a better place for future generations as it was for us. So far... we haven't done very well!! Favorite Quotes: "The first 50 years are to build and acquire; the second 50 are to leave your legacy"; "Do something that scares you every day!"; "The journey in between what you once were and who you are becoming is where the dance of life really takes place". At age 62 I find myself fighting inoperable uterine Cancer and thanks to the man upstairs and the prayers from so many people including many of my readers from AskMarion and JustOneMorePet... I'm beating it. After losing our business because of the economy and factors related to the re-election of President Obama in 2012 followed by 16-mos of job hunting, my architect-trained husband is working as a trucker and has only been home approximately 5-days a month since I was diagnosed, which has made everything more difficult and often lonely... plus funds are tight. Our family medical deductible is 12K per year for two of us; thank you ObamaCare. But thanks to donations from so many of you, we are making ends meet as I go through treatment while taking care of my father-in-law who is suffering from late stage Alzheimer's and my mother-in-law who suffers from RA and onset dementia as well as hearing loss, for which there are no caretaker funds, as I continue the fight here online to inform and help restore our amazing country. And finally I need to thank a core group of family, friends, and readers... all at a distance, who check in with me regularly. Plus, I must thank my furkids who have not left my side through this fight. You can see them at JustOneMorePet.
View all posts by Ask Marion →
This entry was posted in Asshats, Big Brother, Common Sense, Dumbing Down of America, Events, Freedom, Get Involved, Knowledge Is Power, low-informed voters, News and politics, Politics, Stand Up, Wake Up, Watch the Other Hand, You Be the Judge and tagged Beck, Boston, Boston Marathon Bombing, connecting the dots, demand the truth, funds, Glenn Beck, Jihadists, liberal media, lies, loss of common sense, manipulation of the public, MSM, National Targeting Center, prayer, progressivism, radical Islam, radicals in the White House, rebuilding, reddit media, Saudi Arabia, Saving America, smoke and mirrors, terrorism, TheBlaze, Truth. Bookmark the permalink.

8 Responses to How Jihad Incubates – The Boston Bomber’s Mosque