When New York Rep. Carolyn Maloney introduced the legislation last month with eight other Democrats, she boasted that it is “the first bill to require liability insurance of gun buyers nationwide.”

Maloney’s “Firearm Risk Protection Act” requires gun buyers to have “a qualified liability insurance policy” before they are able to legally purchase a firearm.

It also calls for the federal government to impose a fine as much as $10,000 if a gun owner doesn’t have insurance on a firearm purchased after the bill goes into effect.

“It shall be unlawful for a person who owns a firearm purchased on or after the effective date of this subsection not to be covered by a qualified liability insurance policy,” the bill text reads.

The bill would also make it a federal crime to sell a firearm to anyone without insurance.

“For too long, gun victims and society at large have borne the brunt of the costs of gun violence,” Maloney said as she introduced the legislation. “My bill would change that by shifting some of that cost back onto those who own the weapons.”

Chris Cox, the executive director of the NRA’s Institute for Legislative Action, told The Daily Caller that the bill is “ridiculous on its face, as it presumes law-abiding gun owners are guilty for merely exercising a fundamental, constitutional right.”

“But it does reveal what Rep. McCarthy really thinks about honest people who believe in the right to keep and bear arms,” Cox said.

The bill defines “qualified liability insurance” as a policy that covers the “purchaser specifically for losses resulting from use of the firearm while it is owned by the purchaser.” Buyers would have to obtain insurance from a company licensed or authorized by a state insurance regulatory authority.

Exceptions would be made for law enforcement, military and employees of government departments and agencies.

In the aftermath of the Sandy Hook Elementary School massacre, President Barack Obama and top Democrats have been pushing to pass a gun control measure through Congress. A federal liability insurance mandate for gun owners, while debated in some states, is not a proposal that has been seriously considered on the Hill yet.

With many states requiring drivers to carry auto insurance, Maloney argues that, “We have a long history of requiring insurance for high-risk products — and no one disputes that guns are dangerous.”

“While many individual states are debating this issue now, it makes more sense for Congress to establish a national requirement to allow the insurance markets to begin to price the risks involved consistently nationwide,” she said.

Thought for the Day: “The WH who said its health care program will not increase costs, now says its gun control will not affect 2nd Amendment rights.” … Stephen Yates 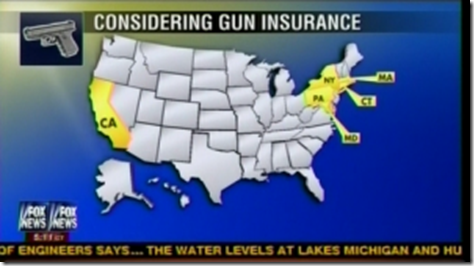 I am a babyboomer and empty nester who savors every moment of my past and believes that it is the responsibility of each of us in my generation and Americans in general to make sure that America is as good or even a better place for future generations as it was for us. So far... we haven't done very well!! Favorite Quotes: "The first 50 years are to build and acquire; the second 50 are to leave your legacy"; "Do something that scares you every day!"; "The journey in between what you once were and who you are becoming is where the dance of life really takes place". At age 62 I find myself fighting inoperable uterine Cancer and thanks to the man upstairs and the prayers from so many people including many of my readers from AskMarion and JustOneMorePet... I'm beating it. After losing our business because of the economy and factors related to the re-election of President Obama in 2012 followed by 16-mos of job hunting, my architect-trained husband is working as a trucker and has only been home approximately 5-days a month since I was diagnosed, which has made everything more difficult and often lonely... plus funds are tight. Our family medical deductible is 12K per year for two of us; thank you ObamaCare. But thanks to donations from so many of you, we are making ends meet as I go through treatment while taking care of my father-in-law who is suffering from late stage Alzheimer's and my mother-in-law who suffers from RA and onset dementia as well as hearing loss, for which there are no caretaker funds, as I continue the fight here online to inform and help restore our amazing country. And finally I need to thank a core group of family, friends, and readers... all at a distance, who check in with me regularly. Plus, I must thank my furkids who have not left my side through this fight. You can see them at JustOneMorePet.
View all posts by Ask Marion →
This entry was posted in Asshats, Big Brother, Freedom, Get Involved, Knowledge Is Power, News and politics, Off the Grid, Patriotism, Politics, Self-Reliance, Preparedness and Survival, Stand Up, Wake Up, Watch the Other Hand, You Be the Judge and tagged Big Brother, connect the dots, disarming America, disarming the poor, Firearm Risk Protection Act, gun grabbers, gun insurance, gun owners, guns, insurance, second amendment, smoke and mirrors, wake-up America, watch the other hand. Bookmark the permalink.

5 Responses to Democrats propose $10,000 fine for gun owners who don’t have insurance – Updated