Here’s a thought to warm some of your hearts….

From: Ed Chenel, A police officer in Australia

Hi Yanks, I thought you all would like to see the real figures from Down Under.It has now been 12 months since gun owners in Australia were forced by a new law to surrender 640,381 personal firearms to be destroyed by our own government, a program costing Australia taxpayers
more than $500 million dollars.

The first year results are now in:

In the state of Victoria…..
lone, homicides with firearms are now up 300 percent.(Note that while the law-abiding citizens turned them in, the criminals did not
and criminals still possess their guns!)

While figures over the previous 25 years showed a steady decrease in armed robbery with firearms, this has changed drastically upward in the past 12 months, since the criminals now are guaranteed that their prey is unarmed.There has also been a dramatic increase in break-ins and assaults of the elderly, while the resident is at home.

Australian politicians are at a loss to explain how public safety has decreased, after such monumental effort and expense was expended in ‘successfully ridding Australian society of guns….’ You won’t see this on the American evening news or hear your governor or members of the State Assembly disseminating this information.

The Australian experience speaks for itself. Guns in the hands of honest citizens save lives and property and, yes, gun-control laws affect only the law-abiding citizens.

Will you be one of the sheep to turn yours in?

WHY? You will need it.

DON’T BE A MEMBER OF THE SILENT MAJORITY. BE ONE OF THE VOCAL MINORITY WHO WON ‘T STAND FOR NONSENSE 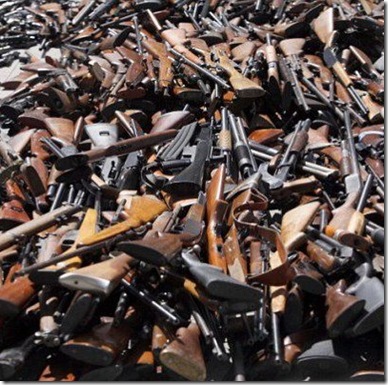 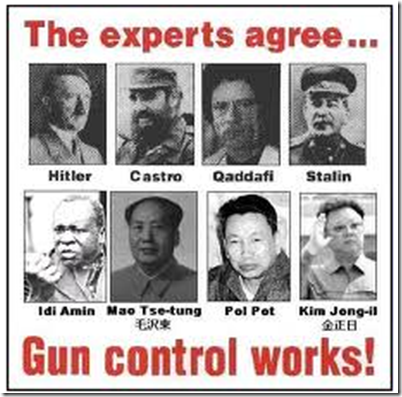 In Switzerland every citizen is given a gun, taught how to use it for their protection. No wars and safest country in the world…

English Warning To Americans: DONT GIVE UP YOUR GUNS!

I am a babyboomer and empty nester who savors every moment of my past and believes that it is the responsibility of each of us in my generation and Americans in general to make sure that America is as good or even a better place for future generations as it was for us. So far... we haven't done very well!! Favorite Quotes: "The first 50 years are to build and acquire; the second 50 are to leave your legacy"; "Do something that scares you every day!"; "The journey in between what you once were and who you are becoming is where the dance of life really takes place". At age 62 I find myself fighting inoperable uterine Cancer and thanks to the man upstairs and the prayers from so many people including many of my readers from AskMarion and JustOneMorePet... I'm beating it. After losing our business because of the economy and factors related to the re-election of President Obama in 2012 followed by 16-mos of job hunting, my architect-trained husband is working as a trucker and has only been home approximately 5-days a month since I was diagnosed, which has made everything more difficult and often lonely... plus funds are tight. Our family medical deductible is 12K per year for two of us; thank you ObamaCare. But thanks to donations from so many of you, we are making ends meet as I go through treatment while taking care of my father-in-law who is suffering from late stage Alzheimer's and my mother-in-law who suffers from RA and onset dementia as well as hearing loss, for which there are no caretaker funds, as I continue the fight here online to inform and help restore our amazing country. And finally I need to thank a core group of family, friends, and readers... all at a distance, who check in with me regularly. Plus, I must thank my furkids who have not left my side through this fight. You can see them at JustOneMorePet.
View all posts by Ask Marion →
This entry was posted in Asshats, Big Brother, Knowledge Is Power, Patriotism, Politics, Stand Up, Strength, Wake Up, Watch the Other Hand, Wisdom, You Be the Judge and tagged Australia, Connecticut, conspiracies, disarming America, globalist agenda, gun control, gun grab, gun grabbers, Hillary Clinton, liar liar, manipulation of the public, Newtown, Obama agenda, Obamaland, progressivism, Sandy Hook, shootings, smoke and mirrors, the plan, UN, UN Small Arms Treaty. Bookmark the permalink.

20 Responses to The Australian Gun Ban