Effectively affirming the concerns of five much-maligned Republican House members and the evidence presented in an investigative book, an Egyptian magazine claims six American Muslim leaders who work with the Obama administration are Muslim Brotherhood operatives who have significant influence on U.S. policy.

Egypt’s Rose El-Youssef magazine, in a Dec. 22 story, said the six men turned the White House “from a position hostile to Islamic groups and organizations in the world to the largest and most important supporter of the Muslim Brotherhood.”

The Egyptian article was translated and reported by the Investigative Project on Terrorism, or IPT.

IPT said that while the story is largely unsourced, it is significant because it raises the issue to Egyptian readers.

Meanwhile, outspoken Republican congressman Louie Gohmert has been pressing for an investigation of the Muslim Brotherhood’s influence on the federal government, contending a probe is necessary because of the Obama administration’s “horrendous decisions” in backing the so-called “Arab Spring” revolutions in the Middle East.

The East Texas lawmaker was one of five Republican Congress members who stirred bipartisan controversy in June by raising concern about Muslim Brotherhood infiltration in the nation’s capital.

The Egypt-based Muslim Brotherhood was formed in the 1920s after the demise of the Ottoman Turkish empire with the intent of helping establish Islamic rule worldwide. It’s stated goal for the U.S. is “a kind of grand jihad” aimed at “eliminating and destroying the Western civilization from within” so that “Allah’s religion is made victorious over all other religions.”

In 2009, the WND Books bestseller “Muslim Mafia: Inside the Secret Underworld that’s Conspiring to Islamize America” featured an internal Council on American-Islamic Relations memo written in 2007 that called for infiltrating the “judiciary, intelligence and homeland security committees” by, among other things, “placing Muslim interns” in Capitol Hill offices.

When the book was released, Rep. Sue Myrick, R-N.C., co-founder of the bipartisan House Anti-Terrorism/Jihad Caucus and a member of the House Permanent Select Committee On Intelligence, pointed out at a press conference in Washington that groups such as CAIR and the Islamic Society of North America “have a proven record of senior officials being indicted and either imprisoned or deported from the United States.”

She noted evidence presented at the trial of the Texas-based Muslim charity Holy Land Foundation, convicted of funding Hamas, exposed CAIR, ISNA and others as front groups for the Muslim Brotherhood in the United States.

Myrick exposed the absence of a formal vetting process by Congress for screening radical Muslims invited to work or pray or speak at the Capitol. CAIR, consequently, placed a number of employees within the Capitol, including known terrorists and terrorist suspects.

CAIR Executive Director Nihad Awad, for example, invited al-Qaida terrorist Anwar Awlaki to speak and pray at the Capitol. Awad also helped get Awlaki into the Pentagon within months of Awlaki assisting the 9/11 hijackers, Catherine Herridge revealed in her book “The Next Wave.”

The Egyptian magazine noted Alikhan is a founder of the World Islamic Organization, identifying it as a Brotherhood “subsidiary,” IPT reported.

Alikhan was responsible for the “file of Islamic states” in the White House and provides the direct link between the Obama administration and the Arab Spring revolutions of 2011, according to the magazine.

Elibiary, as WND reported in October 2011, was singled out by Gohmert at a House hearing. The Republican congressman confronted Department of Homeland Security Secretary Janet Napolitano with a charge that Elibiary, who had a security clearance as a member of the DHS advisory council, accessed a federal database and shopped sensitive reports to a left-leaning media outlet to publicize his claim that the department is promoting “Islamophobia”

Elibiary, president and CEO of the Freedom and Justice Foundation of Carrollton, Texas, has been a strong supporter of the radical Islamic theologian Sayyid Qutb, whose teachings inspired and continue to govern al-Qaida and Islamic jihadist organizations worldwide.

WND reported in 2004 that Elibiary spoke at a conference that honored the founder of the Iranian Islamic revolution, Ayatollah Khomeini. Elibiary has strongly criticized the U.S. government’s prosecution of fundraisers for Hamas and is a defender of CAIR.

He has criticized the U.S. government’s prosecution and conviction of the Holy Land Foundation and five former officials for providing more than $12 million to Hamas, characterizing the case as a defeat for the United States.

He also was on the organizing committee of the Critical Islamic Reflection along with key Brotherhood figures such as Jamal Barzinji, Hisham al-Talib and Yaqub Mirza.

MPAC’s al-Marayati has been among the most influential Muslim American leaders in recent years, IPT pointed out. The Egyptian magazine shows the links between MPAC and the international Muslim Brotherhood infrastructure.

Obama appointed Magid, chief of the Muslim Brotherhood-founded ISNA, as an adviser to the Department of Homeland Security. Magid also has also given speeches and conferences on American Middle East policy at the State Department and offered advice to the FBI, the Egyptian magazine said.

Patel maintains a close relationship with Tariq Ramadan, the grandson of Muslim Brotherhood founder Hasan al-Banna, Rose El-Youssef reported. He’s a member of the Muslim Students Association, which was identified as a Muslim Brotherhood front group in a 1991 document introduced into evidence during the Holy Land Foundation trial.

In July, Gohmert, along with Rep. Michele Bachmann, R, Minn., and three other Republican House members, pointed to Hillary Clinton’s top aide, Huma Abedin, as a possible Muslim Brotherhood influence on U.S. policy. The lawmakers asked the inspector generals at the departments of Homeland Security, Justice and State to investigate, prompting Democrats and Republicans to rush to Abedin’s defense.

However, as WND reported, Abedin worked for an organization founded by her family that is effectively at the forefront of a grand Saudi plan to mobilize U.S. Muslim minorities to transform America into a strict Wahhabi-style Islamic state, according to an Arabic-language manifesto issued by the Saudi monarchy. Abedin also was a member of the executive board of the Brotherhood’s Muslim Student Association.

The internal memo said Muslim Brotherhood members “must understand that their work in America is a kind of grand jihad in eliminating and destroying the Western civilization from within and ‘sabotaging’ its miserable house by their hands and by the hands of the believers so that it is eliminated and Allah’s religion is made victorious over all other religions.”

Gohmert and other advocates for an investigation of the Muslim Brotherhood’s influence on the U.S. government argue a simple reading of security clearance guidelines in reference to Huma Abedin’s family would warrant investigation.

The Center for Security Policy notes that security clearance guidelines for federal employees state a “security risk may exist when an individual’s immediate family, including cohabitants and other persons to whom he or she may be bound by affection, influence, or obligation are not citizens of the United States or may be subject to duress.”

The guidelines express concern for any “association or sympathy with persons or organizations that advocate the overthrow of the United States Government, or any state or subdivision, by force or violence or by other unconstitutional means.”

Nevertheless, Washington Post columnist Dana Milbank has suggested researchers and lawmakers who have presented evidence of the Muslim Brotherhood ties of Abedin and her family are motivated by racism. He commented in a column that it’s “hard to escape the suspicion” that the charges have “something to do with the way she looks and how she worships.”

Sen. John McCain, R-Ariz., called the request for an investigation of Abedin and her family a “sinister” and “nothing less than an unwarranted and unfounded attack on an honorable woman, a dedicated American and a loyal public servant.” 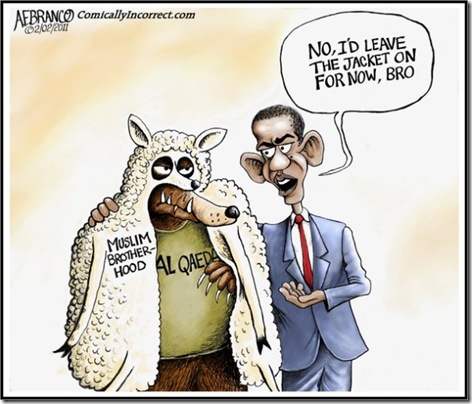 By Art Moore, who entered the media world as a public relations assistant for the Seattle Mariners and a correspondent covering pro and college sports for Associated Press Radio. He reported for a daily newspaper and served as senior news writer for Christianity Today magazine before joining WND shortly after 9/11. He holds a master’s degree in communications from Wheaton College Graduate School.

Obama’s “Muslim World” Journey and Its Consequences for America

The Elephant in the Room: Is Muslim Brotherhood Paying Huma and Former Congressman Weiner Rent for $3.3M Apartment?

The Most Important Press Conference Ever Held at Any Time in U.S. History: Part I

The Most Important Press Conference Ever Held at Any Time in U.S. History: Part II

Anthony Weiner Resigns From Congress But WeinerGate May Not Be Over!!

They have already sold us down the river, through this U.N. Resolution which implements Sharia Law over the U.S. Constitution and favors Islam over all other religions and over our right to freedom of speech in the United States. Representative and GOP Primary candidate for President Michele Bachmann explained this on Huckabee one Saturday:

Book: The Terrorist Next Door

I am a babyboomer and empty nester who savors every moment of my past and believes that it is the responsibility of each of us in my generation and Americans in general to make sure that America is as good or even a better place for future generations as it was for us. So far... we haven't done very well!! Favorite Quotes: "The first 50 years are to build and acquire; the second 50 are to leave your legacy"; "Do something that scares you every day!"; "The journey in between what you once were and who you are becoming is where the dance of life really takes place". At age 62 I find myself fighting inoperable uterine Cancer and thanks to the man upstairs and the prayers from so many people including many of my readers from AskMarion and JustOneMorePet... I'm beating it. After losing our business because of the economy and factors related to the re-election of President Obama in 2012 followed by 16-mos of job hunting, my architect-trained husband is working as a trucker and has only been home approximately 5-days a month since I was diagnosed, which has made everything more difficult and often lonely... plus funds are tight. Our family medical deductible is 12K per year for two of us; thank you ObamaCare. But thanks to donations from so many of you, we are making ends meet as I go through treatment while taking care of my father-in-law who is suffering from late stage Alzheimer's and my mother-in-law who suffers from RA and onset dementia as well as hearing loss, for which there are no caretaker funds, as I continue the fight here online to inform and help restore our amazing country. And finally I need to thank a core group of family, friends, and readers... all at a distance, who check in with me regularly. Plus, I must thank my furkids who have not left my side through this fight. You can see them at JustOneMorePet.
View all posts by Ask Marion →
This entry was posted in Politics, Religion and Faith, Stand Up, Wake Up, Watch the Other Hand, Wisdom, You Be the Judge and tagged CAIR, Caliphate, Egypt, Hillary Clinton, homeland security, Huma Abedin, Huma Abedin Weiner, Islam, John McCain, Michele Bachmann, Middle East, Muslim Brotherhood, Muslims, Muslims in the White House, Obamaland, Pam Geller, radicals in the White House, Sharia Law, wake-up America, WND. Bookmark the permalink.