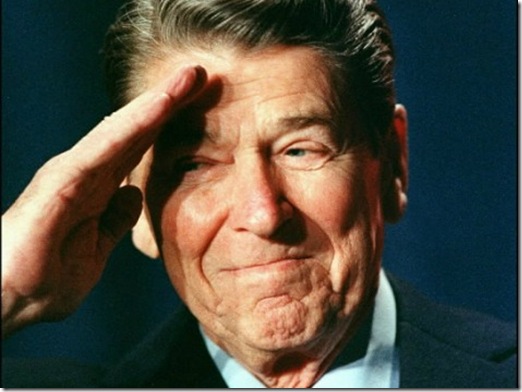 After 30 years, The New York Times has admitted that Reaganomics worked (photo:  afp)

Breitbart.com:  The inadvertent revelation comes in a November 29th article by Binyamin Appelbaum chronicling the steadily falling tax burden Americans have experienced since the 1980s.

AEI columnist James Pethokoukis notes that the heart of The Times’ article is that in 2010 Americans "paid far less in total taxes — federal, state and local — than they would have paid 30 years ago."

Pethokoukis points out that some tax hike advocates think this means that America’s tax burden is too low and time has come for a hike. But Pethokoukis disagrees.

Maybe I’m crazy, but I think the reduction in the tax burden — staring with the Reagan tax cuts — has been a huge competitive advantage for the U.S. We should keep that edge. Check out these numbers. In 1981, France’s per capita GDP was 81% of U.S. per capita GDP, Germany’s 83%, Italy’s 81%, Britain’s 69%.

Pethokoukis reminds readers that Europe was closing the gap with U.S. wealth by 1980, but after Reagan’s tax cuts that trend stagnated and in other cases even began to reverse.

There are many great points made in the Pethokoukis piece and you need to go read them, but his last one is the funniest—or saddest, depending on your point of view.

4. Another bit: “Economists agree that taxes on business are passed on to investors, reducing profits, and to workers, reducing wages. Upper-income households bear the brunt of these taxes, and corporate tax collections have fallen sharply.” That is right. Taxes matter.

Funny, the NYT never mentioned this widely known economic fact when Mitt Romney was attacked for saying “Corporations are people.”

It seems there are a lot of things the Gray Lady never mentions.

Zero Hedge: Two months ago, there were various prominent pundits who were furiously mocked and ridiculed by those whose job in the media it is to mock and ridicule, for suggesting what most know: that economic data is widely nuanced, massaged, adjusted, goal-seeked and outright manipulated by various political interests. That someone would feign outrage by this allegation is laughable at best (and sorry, the "too many people were involved to keep it a secret" excuse is now absolute rubbish following the confirmation of Liborgate, yet another conspiracy theory until it became a conspiracy fact), yet all the "serious" outlets of insight did just that. Now that the election is over, for one reason or another "unnuanced" normalcy is about to strike back with a vengeance, as soon as tomorrow with the official release of November jobs data. And if the just released Gallup unemployment data is any indication, the amount of outright goal-seeking by the fine folks at the BLS was nothing short of startling. Because after recording an adjusted unemployment rate of 7.4% in October, the November unemployment rate, based on a random sample of 29,308 adults, soared by a whopping 0.9% in one month to 8.3%, the most since the Great financial crisis itself! And furthermore, at 8.3% the unemployment rate is now the highest since May. Is it time yet for all those sell-sliders to admit they were wrong weeks after producing beautiful pitch-books of how 2013 will be "different this time" and the economy will soar? Or should we wait a few weeks first?

The unemployment rate per Gallup:

These results are based on Gallup Daily tracking interviews, conducted by landline and cell phone, with approximately 30,000 Americans throughout the month — 67.2% of whom are active in the workforce. Gallup calculates a seasonally adjusted unemployment rate by applying the adjustment factor the government used for the same month in the previous year. Last year, the government adjusted the November rate upward by 0.5 percentage points.

It is unclear what caused the increase in the unemployment rate in November, although some experts speculate that it was caused by jobs lost as a result of superstorm Sandy. It is also possible that lackluster holiday hiring is to blame.

Although the increase in the unadjusted rate in November is a sharp contrast to the 0.9-point decline seen in October, November’s 7.8% rate is still tied for the second-best unadjusted unemployment monthly reading of 2012. However, on an adjusted basis, November’s rate is the highest reading in six months. Looking at year-to-year comparisons, seasonally adjusted unemployment is down from 8.9% in November 2011.

As for U-6 (underemployment)…

Underemployment, as measured without seasonal adjustment, was 17.2% in November, a 1.3-point increase since the end of October. The uptick in November also puts an end to the six-month trend of improvements or no change. Still, underemployment has improved 0.9 points since November 2011.

Finally, as so often happens in the New Normal, take anything you believe and flip it. Which is why if objective reality is precedent, expect the BLS to announce yet another improvement in the unemployment rate, increasingly more often notices of major layoffs of blue chip companies notwithstanding.

And now we are hearing that Obama May Veto His Tax Proposal If Not Granted ‘Power’ to Raise Debt Ceiling.  It is all about the power grab, not about fixing the economy or help America or Americans!  Wake-up be for it is too late! See:

JTF: Romney Defeated Obama – If Not For Voter Fraud – But We Can Still Change the Outcome!

I am a babyboomer and empty nester who savors every moment of my past and believes that it is the responsibility of each of us in my generation and Americans in general to make sure that America is as good or even a better place for future generations as it was for us. So far... we haven't done very well!! Favorite Quotes: "The first 50 years are to build and acquire; the second 50 are to leave your legacy"; "Do something that scares you every day!"; "The journey in between what you once were and who you are becoming is where the dance of life really takes place". At age 62 I find myself fighting inoperable uterine Cancer and thanks to the man upstairs and the prayers from so many people including many of my readers from AskMarion and JustOneMorePet... I'm beating it. After losing our business because of the economy and factors related to the re-election of President Obama in 2012 followed by 16-mos of job hunting, my architect-trained husband is working as a trucker and has only been home approximately 5-days a month since I was diagnosed, which has made everything more difficult and often lonely... plus funds are tight. Our family medical deductible is 12K per year for two of us; thank you ObamaCare. But thanks to donations from so many of you, we are making ends meet as I go through treatment while taking care of my father-in-law who is suffering from late stage Alzheimer's and my mother-in-law who suffers from RA and onset dementia as well as hearing loss, for which there are no caretaker funds, as I continue the fight here online to inform and help restore our amazing country. And finally I need to thank a core group of family, friends, and readers... all at a distance, who check in with me regularly. Plus, I must thank my furkids who have not left my side through this fight. You can see them at JustOneMorePet.
View all posts by Ask Marion →
This entry was posted in Choices, Common Sense, Dumbing Down of America, Economy and Money, Knowledge Is Power, News and politics, Politics, Wake Up, Watch the Other Hand, Wisdom, You Be the Judge and tagged debt, economy, educate yourself, elections have consequences, food stamps, Gallup, health insurance exchanges, History, joblessness, jobs, Mitt Romney, NY Times, ObamaCare, ObamaTax, polls, Reaganomics, Ronald Reagan, safety net, taxes, unemployment. Bookmark the permalink.