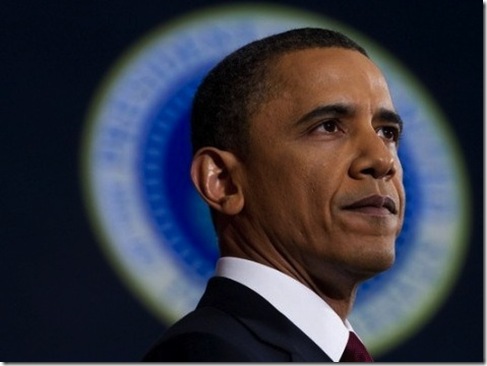 Yet again, President Obama’s Thanksgiving message eschewed any direct reference to thanking God, making this the fourth straight year in which the President of the United States has ignored the central message of the holiday in favor of political grandstanding.

This year, Obama’s central message was that now that he’s been re-elected, Americans should agree with all of his policies. His unity routine sounds strangely empty after a campaign in which he focused on dividing Americans:

But most of all, it’s a time to give thanks for each other, and for the incredible bounty we enjoy.

That’s especially important this year. As a nation, we’ve just emerged from a campaign season that was passionate, noisy, and vital to our democracy. But it also required us to make choices – and sometimes those choices led us to focus on what sets us apart instead of what ties us together; on what candidate we support instead of what country we belong to ….

We’re also grateful that this country has always been home to Americans who see these blessings not simply as gifts to enjoy, but as opportunities to give back. Americans who believe we have a responsibility to look out for those less fortunate – to pull each other up and move forward together.

How are we supposed to move forward together, you ask? Why, with greater government spending, of course!

As for God, here was the only mention – as a throwaway line in a hackneyed aphorism, used constantly by this president for communitarian sloganeering:

As Americans, we are a bold, generous, big-hearted people. When our brothers and sisters are in need, we roll up our sleeves and get to work – not for the recognition or the reward, but because it’s the right thing to do. Because there but for the grace of God go I. And because here in America, we rise or fall together, as one nation and one people.

No mention of thanking God. None.

But, of course, we’re used to this. In 2011, there was no mention of God at all. In 2010, Obama was closer, but still missed the mark (“we’ll spend some time taking stock of what we’re thankful for: the God-given bounty of America, and the blessings of one another”). In 2009, Obama didn’t thank God, either.

Compare that to Obama’s Thanksgiving Day proclamations, which he does not read or speak. Those are filled with God – at least for the last three years. In his first year, filled with the vim and vigor of his original election, Obama preferred to eschew any direct thanking of God even in his proclamation.

2012: “On Thanksgiving Day, individuals from all walks of life come together to celebrate this most American tradition, grateful for the blessings of family, community, and country. Let us spend this day by lifting up those we love, mindful of the grace bestowed upon us by God and by all who have made our lives richer with their presence.”

2011: “As we gather in our communities and in our homes, around the table or near the hearth, we give thanks to each other and to God for the many kindnesses and comforts that grace our lives. Let us pause to recount the simple gifts that sustain us, and resolve to pay them forward in the year to come.”

2010: “As Americans gather for the time-honored Thanksgiving Day meal, let us rejoice in the abundance that graces our tables, in the simple gifts that mark our days, in the loved ones who enrich our lives, and in the gifts of a gracious God.”

Of course, nobody sees these proclamations, so Obama doesn’t have to be embarrassed about them.

It’s no wonder that this President’s Democratic National Committee platform tried to remove God. He’s not a big fan of the Big Guy. Even on Thanksgiving. After all, what need do you have for God when you’ve got the state?

Barack Obama’s open mockery of the Sign of the Cross

Happy Thanksgiving! President Abraham Lincoln’s Thanksgiving Proclamation of 1863 Called the Nation to Give Thanks to God

Did You Know… the Founding Fathers and God

A National Crisis in Character… So Let Us Recapture The Culture!

I am a babyboomer and empty nester who savors every moment of my past and believes that it is the responsibility of each of us in my generation and Americans in general to make sure that America is as good or even a better place for future generations as it was for us. So far... we haven't done very well!! Favorite Quotes: "The first 50 years are to build and acquire; the second 50 are to leave your legacy"; "Do something that scares you every day!"; "The journey in between what you once were and who you are becoming is where the dance of life really takes place". At age 62 I find myself fighting inoperable uterine Cancer and thanks to the man upstairs and the prayers from so many people including many of my readers from AskMarion and JustOneMorePet... I'm beating it. After losing our business because of the economy and factors related to the re-election of President Obama in 2012 followed by 16-mos of job hunting, my architect-trained husband is working as a trucker and has only been home approximately 5-days a month since I was diagnosed, which has made everything more difficult and often lonely... plus funds are tight. Our family medical deductible is 12K per year for two of us; thank you ObamaCare. But thanks to donations from so many of you, we are making ends meet as I go through treatment while taking care of my father-in-law who is suffering from late stage Alzheimer's and my mother-in-law who suffers from RA and onset dementia as well as hearing loss, for which there are no caretaker funds, as I continue the fight here online to inform and help restore our amazing country. And finally I need to thank a core group of family, friends, and readers... all at a distance, who check in with me regularly. Plus, I must thank my furkids who have not left my side through this fight. You can see them at JustOneMorePet.
View all posts by Ask Marion →
This entry was posted in Asshats, Choices, Communication, Holidays, News and politics, Patriotism, Politics, Religion and Faith, Spirituality, Tradition, Wake Up, We Are All God's Creatures, You Be the Judge and tagged CHRISTIAN NATION, elections have consequences, Founding Fathers, God, holidays, Judeo-Christian values, Obamaland, speeches, Thanksgiving. Bookmark the permalink.