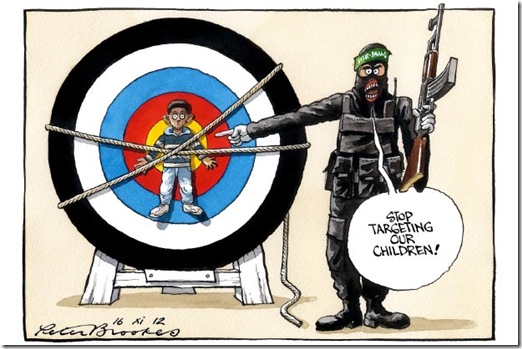 The Israelis finally got sick and tired of having rockets, Iranian supplied missiles and mortars being fired at their civilians by Hamas and decided to do something about it. And as always, every time Israel defends itself, it’s somehow controversial.

The whole scenario reminds me of the old movie ‘Groundhog Day’. The Israelis are attacked, they defend themselves, they’re forced by international pressure to stop short of totally eradicating the threat, there a sort of ceasefire and the whole cycle repeats itself a few years later once their enemies regroup and re-arm.

The same accusations of ‘disproportionate response’ likewise resurface each time. Protesters in the EU probably know by now to store those defaced Israeli flags with a swastika replacing the Mogen David in the closet for future use rather than buying new ones.

The case of Gaza is particularly egregious. When the Israelis agreed to sign on to the Road Map and ethnically cleanse Jews from Gaza as one of the conditions, they were given iron-clad security guarantees by the U.S., the EU,The Egyptian government and the Palestinian Authority who were supposedly going to be running the place that Gaza would never be allowed to become a security threat to Israel again.

At this point, the entire situation is something Lewis Carroll couldn’t have dreamed up in his wildest opium fantasies.

Israel has nothing to do with running Gaza, yet they’re deemed ‘occupiers’ officially by the UN.

Hamas is an openly genocidal organization, yet the Israelis are faulted because negotiating with Hamas has been a dead end.And they’re also expected to treat seriously with countries like Egypt and the Palestinian Authority that defend them.

Israel is at war now with Hamas, yet Gaza still receives gas, electricity and water courtesy of Israel.

And wackiest of all, here we have terrorist entity shooting Iranian supplied missiles at Israel’s major cities and hiding behind a civilian population and it is the Israelis who are being told on one hand they have a right to defend themselves and in the same breath are cautioned not to defend themselves by dealing with the threat decisively, something any other nation would do in a heartbeat.

Secretary of State Clinton is in the region and there are rumors of another ‘ceasefire’ being brokered. Unfortunately, there’s no lasting peace possible in this instance without removing Hamas from the equation permanently. We’ll see what develops.

This week’s contest, of course, is dedicated to the land and people of Israel, her armed forces and to a true and lasting peace.

For those of you interested in investing a little time seconding that sentiment, my friend Lori Lowenthal Marcus of Z-Street has something happening this week that will allow you to get directly involved with the Decision Maker in this situation if you wish.

It’s geared towards Jews, but those of you whom aren’t can improvise quite easily, and your input will be most welcome.

This week, Ask Marion and Right Truth took advantage of my generous offer of linkage and earned honorable mention status with some excellent pieces they sent in.

Simply head over to Joshuapundit and post the title a link to the piece you want considered along with an e-mail address (which won’t be published) in the comments section of any entry no later than Monday 6PM PST in order to be considered for our honorable mention category. Then just return the favor by creating a post on your site linking to the Watcher’s Council contest for the week.

And last but not least, I and my fellow Council members also join together in wishing you and yours a wonderful Thanksgiving.

OK! So let’s see what we have this week….

I am a babyboomer and empty nester who savors every moment of my past and believes that it is the responsibility of each of us in my generation and Americans in general to make sure that America is as good or even a better place for future generations as it was for us. So far... we haven't done very well!! Favorite Quotes: "The first 50 years are to build and acquire; the second 50 are to leave your legacy"; "Do something that scares you every day!"; "The journey in between what you once were and who you are becoming is where the dance of life really takes place". At age 62 I find myself fighting inoperable uterine Cancer and thanks to the man upstairs and the prayers from so many people including many of my readers from AskMarion and JustOneMorePet... I'm beating it. After losing our business because of the economy and factors related to the re-election of President Obama in 2012 followed by 16-mos of job hunting, my architect-trained husband is working as a trucker and has only been home approximately 5-days a month since I was diagnosed, which has made everything more difficult and often lonely... plus funds are tight. Our family medical deductible is 12K per year for two of us; thank you ObamaCare. But thanks to donations from so many of you, we are making ends meet as I go through treatment while taking care of my father-in-law who is suffering from late stage Alzheimer's and my mother-in-law who suffers from RA and onset dementia as well as hearing loss, for which there are no caretaker funds, as I continue the fight here online to inform and help restore our amazing country. And finally I need to thank a core group of family, friends, and readers... all at a distance, who check in with me regularly. Plus, I must thank my furkids who have not left my side through this fight. You can see them at JustOneMorePet.
View all posts by Ask Marion →
This entry was posted in Communication, Knowledge Is Power, News and politics, Politics, Wake Up, You Be the Judge and tagged alternative media, bloggers, blogosphere, collection of articles, educate yourself, Hamas, Israel, Middle East, news, news nuggets, Watcher's Council. Bookmark the permalink.