Finally a Fair and Tough Interview by Univision… Obama is Scorched!

Most of the media is content to follow along whatever story line the Obama campaign leads them down. War on women. Romney is a bully. Romney might be a felon etc. In a horrible economy and unstable world Obama has amazingly been questioned very little. It took a foreign media outlet, Univision, to finally ask him some tough questions – and he failed badly.

“We have to go to a foreign entity to be able to get an interview that even asks a hard question of this president. We have to go to Univision,” Glenn lamented on radio this morning.

President Obama was skewered by Univision reporters on Thursday for breaking his promise to enact lasting immigration reform during his first term in the White House.

“But it was a promise, Mr. President,” Univision reporter Jorge Ramos said. “This is very important, I don’t want it to get lost in translation. You promised that, and a promise is a promise and with all due respect, you didn’t keep that promise.”

Obama’s only response was that he does not have the power as president to accomplish everything he wants to, saying it requires cooperation within the other branches of government.

“I am happy to take responsibility for the fact that we didn’t get it done but I did not make a promise that I would get everything done, 100 percent when I was elected as president.”

Check out some highlights from the interview below:

Video -  Jorge Ramos: I Don’t Want This To Get Lost In T…

Video – Jorge Ramos Grills Obama On His Promise to Pass…

Obama can’t answer why America’s embassies weren’t more secure  -  Univision was the network to finally ask the President about the security at our embassies. Why wasn’t it better? Glenn Beck plays Obama’s answer, which painfully shows why he has been avoiding real reporters and going on Letterman, The Pimp with a Limp radio show, and People Magazine – he has no answers.

Real Clear Politics: MITT ROMNEY: I am pleased to represent the party of Governor Susana Martinez (R-NM), Governor Brian Sandoval (R-NV), Governor Luis Fortuno (R-Puerto Rico), Senator Marco Rubio (R-FL) and the Texas Republican candidate for U.S. Senate Ted Cruz. These leaders are Republicans for the same reasons as millions of other Hispanics. They see that ours is the party of opportunity, the party that will restore America’s prosperity. Now at our convention, Governor Martinez describe an experience that some of you may find familiar.

At the beginning of her political career she was a Democrat, and her star began to rise and as it did so she and her husband got an invitation to go to lunch with a couple of Republicans. The words Democrat and Republican never not come up. Instead, they talked about issues, not about party, such as how to keep welfare from become a bear to work and how much government is needed before it becomes burdensome to families and small businesses. When the lunch was over she turned to her husband and she said this, ‘ I’ll be darned, we’re Republicans.’ I love hearing stories like that, I like to hear it much more often and I’m convinced the Republican party is the rifle home of Hispanic Americans.  See Video Here. 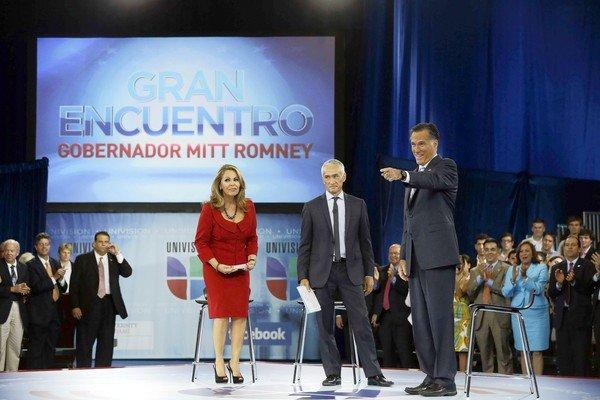 Mitt Romney says at a Univision forum that he would find a bipartisan solution to illegal immigration, and accuses Obama of breaking his promises to Latinos.

I am a babyboomer and empty nester who savors every moment of my past and believes that it is the responsibility of each of us in my generation and Americans in general to make sure that America is as good or even a better place for future generations as it was for us. So far... we haven't done very well!! Favorite Quotes: "The first 50 years are to build and acquire; the second 50 are to leave your legacy"; "Do something that scares you every day!"; "The journey in between what you once were and who you are becoming is where the dance of life really takes place". At age 62 I find myself fighting inoperable uterine Cancer and thanks to the man upstairs and the prayers from so many people including many of my readers from AskMarion and JustOneMorePet... I'm beating it. After losing our business because of the economy and factors related to the re-election of President Obama in 2012 followed by 16-mos of job hunting, my architect-trained husband is working as a trucker and has only been home approximately 5-days a month since I was diagnosed, which has made everything more difficult and often lonely... plus funds are tight. Our family medical deductible is 12K per year for two of us; thank you ObamaCare. But thanks to donations from so many of you, we are making ends meet as I go through treatment while taking care of my father-in-law who is suffering from late stage Alzheimer's and my mother-in-law who suffers from RA and onset dementia as well as hearing loss, for which there are no caretaker funds, as I continue the fight here online to inform and help restore our amazing country. And finally I need to thank a core group of family, friends, and readers... all at a distance, who check in with me regularly. Plus, I must thank my furkids who have not left my side through this fight. You can see them at JustOneMorePet.
View all posts by Ask Marion →
This entry was posted in Choices, Common Sense, Knowledge Is Power, News and politics, Politics, Religion and Faith, Wake Up and tagged 2012 Election, bias American media, conservative Hispanic value, Eelction 2012, fair media, Governor Susana Martinez, Hispanic values, Hispanics, Immigration, jobs, Latino values, Latinos, Obama stumbles, responisble media, terror attack on American Embassies, tough questions, traditional values, Univision. Bookmark the permalink.

1 Response to Finally a Fair and Tough Interview by Univision… Obama is Scorched!