Angry protesters climbed the walls of the U.S. Embassy in Cairo today and hauled down its U.S. flags, replacing them with black flags with Islamic emblems.

The incident prompted U.S. security guards to fire off a volley of warning shots as a large crowd gathered outside, apparently upset about the production of a Dutch film thought to insult the prophet Mohammed, said CNN producer Mohammed Fahmy, who was on the scene.

An Embassy operator told CNN that the facility had been cleared of diplomatic personnel earlier in the day, ahead of the apparent threat, while Egyptian riot police were called to help secure the Embassy walls.

Krauthammer on Obama’s apology to Egypt today: "it was a hostage statement and we should have told them to go to hell.."  See Video

In place of the U.S. flag, the protesters tried to raise a black flag with the words “There is no God but God, and Mohammad is his messenger”, a Reuters witness said.

American Embassy worker in Libya was stripped bare and then burnt alive by Salafis in Benghazi on September 11 2012  -  Wake-up America/Christians/Jews  -  U.S. Embassies are American soil.  These animals have now attacked us on our own soil.  Four more years of Obama and this will be happening in America proper.

Updated: 09/12/12: – 24+ hours later after 4 people were killed, including our Ambassador and the U.S. Libyan Embassy was burned down, President Obama finally speaks out against the atrocities and attack on America (Remember yesterday… We apologized to the mob in Egypt): Libya attack: “Obama vows justice for killing U.S. Envoy” But as far we know… Obama still won’t meet with Prime Minister of Israel, red line Iran but plans to appear on Letterman.

And look who is silent about Deaths of Americans and attacks on American soil: Neither U.N. Secretary or the U.N. Security council have made any comments about the attacks on the U.S. Embassy… another wake-up America call!!  Read more HERE

In other developments on Wednesday: 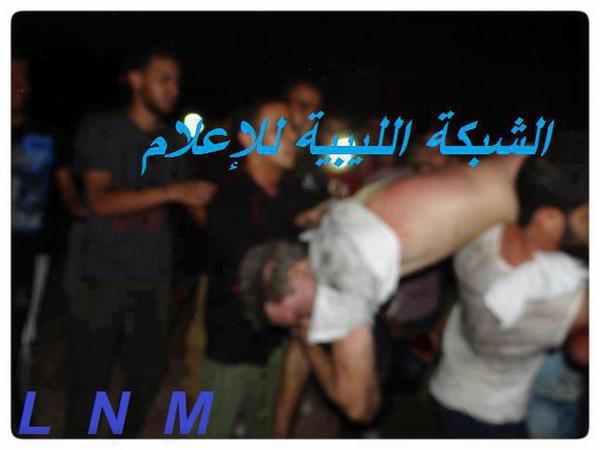 ISLAMISTS DRAG DEAD BODY OF US AMBASSADOR THROUGH THE STREETS! | The Gateway Pundit

Islamists dragged the dead body of US Ambassador Christopher Stevens from the embassy after he was murdered last night.
The radical Islamists attacked the embassy with rocket propelled grenades and machine gun fire.  Our Secretary of State’s comments:

UPDATE: Hillary Clinton just said the “protesters” dragged his body to the hospital.
It sure looks like a strange way to drag an obviously dead man to safety

UPDATE: Barack Obama also just said the Libyans were carrying the ambassador to the hospital.

UPDATE: Here is another shot from another website of the ambassador at the embassy.

Ambassador Stevens was a dedicated career diplomat. He was excited about his new role in Libya.

As diplomatic sources in the capital Tripoli, told the Middle East News Wednesday also that U.S. diplomat who was killed is U.S. Ambassador Christopher Stevens in Libya and three other embassy staff one administrative and two security of U.S. Marines in a rocket attack U.S. consulate in Benghazi on Tuesday .

It should be noted that the protesters had Hajmo the Italian consulate in Benghazi on February 17, 2006 against the backdrop of the publication of Italian media caricatures of Danish painter killed evacuated 14 young Libya Libyan security fire.

Apparently President Obama can’t see Egypt and Libya from his house. On the anniversary of the worst terrorist…

Palin to Obama: Time To Grow A Big Stick

State Department spends $70,000 on Obama’s books – and stirs a controversy

The US State Department calls the purchase of Obama’s books "standard practice," but critics call it "inappropriate."

It’s the biggest books shopping spree we’ve seen in a while.

The State Department bought more than $70,000 worth of President Barack Obama’s books, The Washington Times reported Tuesday. The books, mostly Obama’s 1995 bestseller, “Dreams from My Father,” will be used as Christmas gratuities for embassy staff and to stock “key libraries” around the world.

Records show the US Embassy in Cairo, Egypt, spent more than $40,000 in 2009 on “Dreams,” and the US Embassy in South Korea spent $6,061 on the same title, all to be used for Christmas gratuities. Obama reported between $1 million to $5 million in royalties in 2010 for “Dreams From My Father,” and between $100,000 and $1 million in royalties for “The Audacity of Hope,” far more than he has made as President. If he earned 10 percent royalties on roughly $60,000 worth of the State Department purchases, he would pocket about $6,000, notes The Washington Times.

Both the White House – which was not involved in the buying – and the State Department have come under intense fire for the purchases.

“It’s inappropriate for U.S. taxpayer dollars to be spent on this,” Leslie Paige, the spokesman for Citizens Against Government Waste, told The Washington Times. “This sounds like propaganda.”

Tom Schatz, president of Citizens against Government Waste, told CNN that the purchases provide money from the taxpayers to the president in the form of royalties. "[I]n an era where everyone’s trying to cut back, it really doesn’t look good to the taxpayers to have this being done at the State Department."

The State Department, as expected, is defending its shopping spree.

State Department spokeswoman Victoria Nuland told CNN it is "longstanding practice" to allow embassies to buy books, "to put them out in libraries … give them to contacts, which they think will help deepen understanding of the U.S. political system, of U.S. political figures and leaders of U.S. history, U.S. culture."

The purchases, she added are "done in strict accordance with government procurement standards."

The White House, for it’s part, is happy to wash its hands of this decision.

"Obviously, the White House didn’t have anything to do with this," White House Press Secretary Jay Carney told reporters traveling aboard Air Force One on Wednesday. "I think this is an embassy-by-embassy decision based on what they think … in buying books makes sense for them in terms of advancing American foreign policy interests."

Husna Haq is a Monitor correspondent.

Wake-up America/Christians/Jews – U.S. Embassies are American soil. These animals have now attacked us on our own soil over a movie. Four more years of Obama and this will be happening in America proper.

I am a babyboomer and empty nester who savors every moment of my past and believes that it is the responsibility of each of us in my generation and Americans in general to make sure that America is as good or even a better place for future generations as it was for us. So far... we haven't done very well!! Favorite Quotes: "The first 50 years are to build and acquire; the second 50 are to leave your legacy"; "Do something that scares you every day!"; "The journey in between what you once were and who you are becoming is where the dance of life really takes place". At age 62 I find myself fighting inoperable uterine Cancer and thanks to the man upstairs and the prayers from so many people including many of my readers from AskMarion and JustOneMorePet... I'm beating it. After losing our business because of the economy and factors related to the re-election of President Obama in 2012 followed by 16-mos of job hunting, my architect-trained husband is working as a trucker and has only been home approximately 5-days a month since I was diagnosed, which has made everything more difficult and often lonely... plus funds are tight. Our family medical deductible is 12K per year for two of us; thank you ObamaCare. But thanks to donations from so many of you, we are making ends meet as I go through treatment while taking care of my father-in-law who is suffering from late stage Alzheimer's and my mother-in-law who suffers from RA and onset dementia as well as hearing loss, for which there are no caretaker funds, as I continue the fight here online to inform and help restore our amazing country. And finally I need to thank a core group of family, friends, and readers... all at a distance, who check in with me regularly. Plus, I must thank my furkids who have not left my side through this fight. You can see them at JustOneMorePet.
View all posts by Ask Marion →
This entry was posted in Books, Choices, Common Sense, Events, Knowledge Is Power, News and politics, Politics, Stand Up, Wake Up, Wisdom, You Be the Judge and tagged allies, CNN, connecting the dots, Egypt, Iran, Israel, Libya, Middle East, Obamaland, radicals in the White House, U.S. Embassies, unpresidential. Bookmark the permalink.