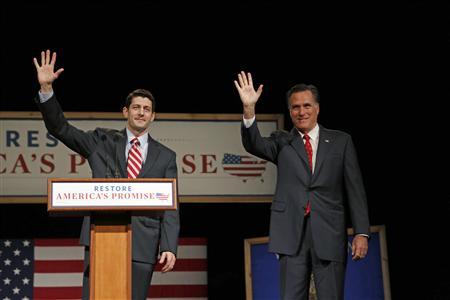 AP, Reuters, and Fox say this leak has been verified… so I will take the chance that they are right.

The final short list — if there was one — was believed to include Ohio Rep. Rob Portman, former Minnesota Governor Tim Pawlenty and Wisconsin Rep. Paul Ryan… some believe perhaps also Florida Senator Marco Rubio and New Jersey Governor Chris Christy.   And some hopeful tea partiers were still praying for a miracle… for Rep. Allen West or Governor Sarah Palin.  But so far the word seems to be that most everyone (conservatives, Republicans and Independents) are happy with the Paul Ryan choice!  Ryan, Chairman of the House Budget Committee, is someone that everyone on the supposed short list, and their constituencies and followers, can support plus he brings the energy of youth to the ticket.  Ryan has also had the courage to go head to head with Obama and has proposed alternative plans for both a budget (more than once) and ObamaCare.

Republican presidential candidate Mitt Romney plans to name Congressman Paul Ryan as his vice presidential running mate on Saturday in a move that will bring the debate over how to reduce government spending and debt to the forefront of the race for the White House.

The announcement marks the end of a several month-long search for a running mate to challenge Democratic President Barack Obama and Vice President Joe Biden in the November 6th election, and this choice will serve to energize conservatives who staged a big effort in recent days to persuade Romney to pick Ryan.

It comes as Romney starts a bus tour on Saturday through four battleground states he needs to win in November – Virginia, North Carolina, Florida and Ohio.

Romney’s move is a bold one as according to recent polls he finds himself suddenly falling behind slightly in what has been a neck-and-neck race with Obama in a campaign that is based largely on the weak U.S. economy.

The selection of Ryan, 42, brings a measure of youthful exuberance and energy to the Republican ticket as party activists prepare to gather in Tampa late this month for the convention that will formally nominate Romney as the presidential nominee. Romney aides hope the vice presidential choice and the enthusiasm produced by the convention will give him a bounce in the polls.  If the excitement the hours after the announced event and leak of Ryan’s name is an example, it will.

Conservatives had been urging Romney to pass over tried-and-true Republicans like Ohio Senator Rob Portman and former Minnesota Governor Tim Pawlenty and instead go with Ryan. But many Republicans had wanted Romney to play it safe and go with either the more experienced Pawlenty or Portman. A Republican source said Portman got a call from Romney saying he had not received the running mate nod, and other reports said Pawlenty got a similar call.

Ryan’s selection immediately draws attention to a budget plan which Ryan proposed as House budget chairman that would include unpopular cuts in government health programs for everyone including the elderly and poor. Democrats are eager to pounce on that issue, particularly in Florida, where many seniors live and which could be a critical state in the November election. And Team Obama and the Progressive Democrats have already signaled, even before the choice is official, that they will resort to the same lies of Ryan throwing granny over the cliff even though that campaign has already been proven to be false. But what else do you do when you have nothing else to run on? We can only hope that Granny and Gramps are a lot smarter than the Dems think they are!

Romney’s decision to pick Ryan showed he is comfortable with having this debate over the future role of government and ways to rein in out-of-control spending and debt. He has endorsed parts of Ryan’s budget. The Weekly Standard magazine reported that the Romney campaign had begun to prepare a vigorous effort to support Ryan as the vice presidential pick and in obvious support they ran the piece:  It’s the Romney-Ryan Plan; Why Not the Romney-Ryan Ticket?

"Conservatives are going to be very energized because this is a demonstration that Romney was willing to make a bold pick," said Republican strategist Matt Mackowiak. "It may not be what he wanted to do three or six months ago, but I think this is as significant a choice as he could have made."

But Bill Burton, senior strategist at the pro-Obama group Priorities USA, suggested Ryan could prove a liability.  "If it’s really Ryan, Romney will have picked one of the only people who could have had an impact in the race. But not the way he wants," he said in a tweet.  But then again, what do you expect?  Juan Williams, Fox News pundit, said that picking was a bold and courageous choice on the part of Mitt Romney, but warned of the left’s certain attack strategy.  Campaign strategist Ed Rollins supported the choice.

Often likening Ryan to Ronald Reagan, conservatives say the Wisconsin lawmaker’s supposed drawbacks as a candidate – mostly stemming from the steep cuts he has proposed in social safety net programs – are actually strengths that could bring heft, content and perhaps a spark to Romney’s campaign. They are the proposals that are necessary to get us out of our financial mess.

Romney bonded with Ryan during the Wisconsin Republican primary battle last spring when Ryan campaigned enthusiastically for the former Massachusetts governor and they often appeared together.  For Romney, an outsider to Washington, Ryan would provide some expertise in dealing with Congress. But as a long-time member of the House, Ryan lacks executive experience, but as a former governor, businessman and head of the Utah Olympics, Mitt brings that to the ticket. The two men compliment each other.

And as you can see from the photos here the two men seem to gel and genuinely like each other. Paul Ryan seems to bring the real Romney… warm, funny and friendly, out in Mitt that all Romney’s friends and associates talk about.

The challenge for Romney will be to introduce Ryan to the broader American electorate. While well known in Washington and among conservatives, most voters are not familiar with him.

The vice presidential selection will now dominate headlines after Romney’s team has been teasing the announcement for weeks, but nobody expected it today… on a Saturday and before the end of the Olympics.  A Romney-Ryan ticket is exactly what America needs to lead us out of the disastrous straits we are now in.  And everyone, including seniors, will have to tighten their belts a bit to save our country for future generations… for our kids and grandkids.  Romney-Ryan are just the guys to turn things around; the right team for the times!

And now that the VP choice is made, Romney will head out on a 4-day swing state bus trip after which the rest of the speaking slots for the convention in Tampa should be announced… and then it will be game on!  There could not be a more stark difference between the two sides and choice on November 6th!

If I wake up in a few hours and Ryan was not the pick… we were all fooled!

Optimism for a Change

Romney-Ryan are just the guys to turn things around; the right team for the times!

I am a babyboomer and empty nester who savors every moment of my past and believes that it is the responsibility of each of us in my generation and Americans in general to make sure that America is as good or even a better place for future generations as it was for us. So far... we haven't done very well!! Favorite Quotes: "The first 50 years are to build and acquire; the second 50 are to leave your legacy"; "Do something that scares you every day!"; "The journey in between what you once were and who you are becoming is where the dance of life really takes place". At age 62 I find myself fighting inoperable uterine Cancer and thanks to the man upstairs and the prayers from so many people including many of my readers from AskMarion and JustOneMorePet... I'm beating it. After losing our business because of the economy and factors related to the re-election of President Obama in 2012 followed by 16-mos of job hunting, my architect-trained husband is working as a trucker and has only been home approximately 5-days a month since I was diagnosed, which has made everything more difficult and often lonely... plus funds are tight. Our family medical deductible is 12K per year for two of us; thank you ObamaCare. But thanks to donations from so many of you, we are making ends meet as I go through treatment while taking care of my father-in-law who is suffering from late stage Alzheimer's and my mother-in-law who suffers from RA and onset dementia as well as hearing loss, for which there are no caretaker funds, as I continue the fight here online to inform and help restore our amazing country. And finally I need to thank a core group of family, friends, and readers... all at a distance, who check in with me regularly. Plus, I must thank my furkids who have not left my side through this fight. You can see them at JustOneMorePet.
View all posts by Ask Marion →
This entry was posted in Economy and Money, Get Involved, Knowledge Is Power, News and politics, Politics, Small Victories, Stand Up, Strength and tagged America's New Dream Team, budget, economy, fiscal responsibility, GOP vice presidential candidate, jobs, Mitt Romney, Paul Ryan, Reaganesque, real hope, Romney-Ryan, Saving America, tea party, tea party favorite, Team Romney, Veep, VP, Wisconsin. Bookmark the permalink.