Remember when Glenn Beck said he would rather have Barack Obama win in 2008 than John McCain and people gasped? Here is why.  The Democrat party has been co-opted by the Progressives.  Hillary Clinton has even openly said that she prefers to be called a Progressive rather than a liberal.  But the Republican party also has some Progressives in their ranks and John McCain is one.  Beck knew that if McCain won in 2008 that he would be working on much of the same programs that Barack Obama has been pushing… just slowly and not so visibly, so the American people would not have noticed until it was too late.  Unfortunately for him and fortunately for us he chose a running mate that helped inspire an awakening in America.  …AskMarion~ 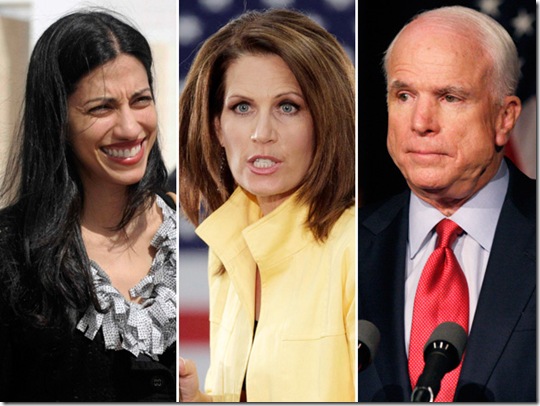 When did we start using Senator John McCain’s “friend” list instead of FBI background investigations to determine whether an individual should receive access to sensitive and classified government information?

John McCain (R-AZ), Lindsey Graham (R-SC) and John Boehner (R-OH) need to step down. They are unfit to serve and they pose a threat to the safety and security of the American people.

We Americans want to know what the hell is going on in Washington D. C.?!

Yesterday Senator Dianne Feinstein (D-CA), the chairwoman of the Senate Intelligence Committee, said that the White House was behind recent national security leaks. She stated, “I think the White House has to understand that some of this is coming from their ranks”.

While Republicans have been blaming the White House for playing politics with national security, John McCain and his good-old-boy network in Congress are doing just that – playing politics at the expense of national security. They are “in” with the White House now; they are against the security of our nation. That’s the bottom line when the spin and propaganda are set aside.

FBI background investigations have been done for decades; it is standard operating procedure for all individuals who will have access to sensitive and classified government information. Familial and organizational associations are a critical component of background investigations to ensure that individuals cannot be blackmailed or easily compromised into divulging classified information to America’s enemies.

Other components of these standard background investigations include polygraphs and even investigation into countries that the individual has travelled to. From drug use to lifestyle and everything in between, the FBI is required to investigate the individual as far back as their place of birth in order to determine whether they, their family members and their close friends could have connections to anyone who could present a risk to national security.

The investigation being requested by Michele Bachmann (R-MN) and four other members of Congress is fully justified and is not asking for anything that isn’t already standard operating procedure.

John McCain’s vehement opposition to that investigation is an outrage and what he and others should be asking is why the investigation was not conducted years ago. His gross negligence and dereliction of duty as a U.S. Senator must not be tolerated.

If John McCain failed to read it, his lack of due diligence is on full display and he needs to step down.

If he read it and remains unable to comprehend the gravity of the situation and the criticality of proceeding with the request for an investigation, he is either incompetent or he holds a blatant disregard for the security of our nation.

There are no shades of gray in this matter when the facts are already laid out for all to see. Even a 5th grader can see that the investigation being requested by Michele Bachmann and others is fully warranted and necessary.

John McCain’s own actions and words have placed him at a fork in the road with only two paths to choose from. One path supports the need for an investigation; the other is the path of resignation… it’s time to decide Mr. McCain.

Having served our country with honor, distinction and sacrifice as a member of our military decades ago, one must ask Mr. McCain if the corrupting forces in Washington D.C. are so potent that he cannot resist turning a blind eye to national security and instead chooses to fight against those who care about the security of our nation.

Where was John McCain when members of Seal Team Six and Special Ops forces were murdered? Egregious ‘leaks’ announced publicly by President Obama and serious unanswered questions surround that massacre and we want to know where John McCain and his good-old-boys stand in terms of calling for an investigation? Their otherwise loud voices are silent on this matter and Mr. McCain needs to know that we’ve noticed.

And where was John McCain over a year ago when a Canadian Diplomat who is a liberal Democrat and self-described Marxist-leaning moderate Muslim, Tarek Fatah, sounded the warning bell that Canada has evidence of infiltration right up to our White House by the fascist forces of the Muslim Brotherhood? McCain was silent again – and we noticed.

We know where Mr. McCain was when he fought to grant Presidential power to indefinitely detain American citizens without charge or trail. In fact, he fought loudly for passage of the S. 1867 NDAA legislation. Either he was too incompetent to understand the language of the bill and what Senator Levin (D-MI) articulated on the Senate floor, or he intentionally condoned this legislation in violation of the Constitutional rights of the American people. We, the American people noticed.

Caption: “Senator Carl Levin admits that there is language in the version of NDAA that did pass, which allows for the indefinite detention of American citizens without proof, trial, judge, or jury…”

John McCain’s recent actions against Michele Bachmann are unacceptable and intolerable. His opposition to a critically important and fully justified investigation is an outrage. It is time that he and his good-old-boys step down. John McCain’s actions represent a clear threat to our national security.

Silent Running – The Targeting of Americans

McCain says American Citizens Can Be Sent to Guantanamo

*Gingrich Defends Bachmann’s Muslim Brotherhood Allegations: ‘What Is It [Her Critics] Are Afraid Of Learning?

hussein Obama is SEATING Muslim Brotherhood in his Administration

Anthony Weiner Resigns From Congress… But WeinerGate May Not Be Over

Weiner Fallout and the Muslim Connection

Clinton Admits We Are Now Reaching Out to the Muslim Brotherhood

So… Why was Weiner forced out and not Clinton?

Vetting Obama – “Palling Around With Terrorists”

I am a babyboomer and empty nester who savors every moment of my past and believes that it is the responsibility of each of us in my generation and Americans in general to make sure that America is as good or even a better place for future generations as it was for us. So far... we haven't done very well!! Favorite Quotes: "The first 50 years are to build and acquire; the second 50 are to leave your legacy"; "Do something that scares you every day!"; "The journey in between what you once were and who you are becoming is where the dance of life really takes place". At age 62 I find myself fighting inoperable uterine Cancer and thanks to the man upstairs and the prayers from so many people including many of my readers from AskMarion and JustOneMorePet... I'm beating it. After losing our business because of the economy and factors related to the re-election of President Obama in 2012 followed by 16-mos of job hunting, my architect-trained husband is working as a trucker and has only been home approximately 5-days a month since I was diagnosed, which has made everything more difficult and often lonely... plus funds are tight. Our family medical deductible is 12K per year for two of us; thank you ObamaCare. But thanks to donations from so many of you, we are making ends meet as I go through treatment while taking care of my father-in-law who is suffering from late stage Alzheimer's and my mother-in-law who suffers from RA and onset dementia as well as hearing loss, for which there are no caretaker funds, as I continue the fight here online to inform and help restore our amazing country. And finally I need to thank a core group of family, friends, and readers... all at a distance, who check in with me regularly. Plus, I must thank my furkids who have not left my side through this fight. You can see them at JustOneMorePet.
View all posts by Ask Marion →
This entry was posted in Knowledge Is Power, Politics, Stand Up, Wake Up, Watch the Other Hand and tagged American Progressivism, Dianne Feinstein, FBI, Hillary Clinton, Huma Abedin, Huma Abedin Weiner, Huma Abudin Weiner, Huma Weiner, John Boehner, John McCain, Leakgate, Lindsey Graham, Michele Bachmann, national security, NDAA, progressivism, Rand Paul, Replublican Progressives, social justice, Weinergate. Bookmark the permalink.

11 Responses to JOHN McCAIN IS A THREAT TO NATIONAL SECURITY