(WND)Voter fraud is the big issue that may decide the outcome of this upcoming election. 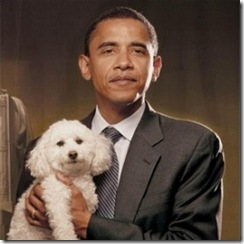 In Seattle, Wash., last month, Brenda Charlston received a voter registration form in the mail from the Voter Participation Center with all the blanks filled in for “Rosie Charlston,” her black Labrador who died in 1998.

The Obama supporting center says it has mailed some 5 million forms using commercially available databases to target Democratic-leaning groups such as unmarried women. What did they use in the Brenda/Rosie mailing? The dead dog mailing list?

In June, in Buford County, Va., Tim Morris received a filled-out voter registration form for “Mozart Morris” addressed to “Mo,” his dog that passed away two years before. Again, the form came in the mail from the Voter Participation Center.

In Bernalillo County, N.M., an anonymous Republican registered his dog as a voter at a voter registration booth at the University of New Mexico to show how easy it would be to defraud the system. Election officials claim they followed the law and referred the case to state prosecutors for criminal investigation of the dog owner!

Election officials throughout the country report a surge of voter registrations from animals, dead people and noncitizens.

Republicans believe Obama is depending on these registrations to win the election and want laws requiring voter ID at the polls. Democrats charge that Republicans are trying to suppress the vote to increase the odds of a Romney win.

This Democrat charge formed the basis of a lawsuit by Obama’s Department of Justice to block a Texas law that requires voter photo ID to vote. Texas is one of 26 states with such laws.

The DOJ claimed the requirement would bar eligible voters from voting and that the cost of getting the proper ID amounted to a “poll tax.” The Texas law provides for a free state ID to anyone lacking a driver’s license or other photo ID.

A study by a DOJ expert produced a long list of Texans who lacked government-issued photo ID and, it was alleged, were thereby disenfranchised. The list and the study were a fraud.

The list turned out to contain the names of 50,000 dead people, 330,377 seniors who can vote by mail without ID, 261,887 voters who included a driver’s license number on their voter registration form, 800,000 Texans who were, in fact, registered to vote and who did have a government issued photo ID.

The list also contained the names of Texans with U.S. military ID (acceptable for photo ID to vote), former Texas residents who had moved to other states, disabled voters who were exempt from the Texas photo ID law and noncitizens.

Strangely, the list of those who “lacked government issued ID” included former President George W. Bush, two state legislators and the wife of another, former U.S. Sen. Phil Gramm, current U.S. Sen. Kay Bailey Hutchison and even the Texas director of elections, Keith Ingram – who was listed not once but twice!

However, even the Texas attorney general has yet to find the names of any dogs, living or dead, on the list.

Obama’s DOJ also went after Florida for passing a similar law. It seems that Obama voters who were dead, felons or noncitizens would not get to vote.

Florida Gov. Rick Scott ordered county election officials to examine the integrity of the voting rolls. In the first review, the names of 83,000 dead people were discovered still registered to vote.

The dead deserve representation given the estate-tax debate, but the law does not yet allow them to vote.

DOJ also objected to Florida’s insistence that felons be barred from voting.

Noncitizens were also found on the voter rolls, and Gov. Scott fought to get access to the federal Systematic Alien Verification for Entitlements, or SAVE, database. SAVE will allow Florida to purge the voter roll of noncitizens.

In a strange, parallel world, the Obama Agriculture Department requires ID on every cow, and now on every chicken, on every American farm.  Guess they will be voting now also via proxy?!?

With the memory still fresh that the 2000 presidential election was decided by a handful of voters in Florida, the determination of who gets to vote in 2012 could decide who will be the next president.

I wonder how many Fifis, Busters, Princesses, Samsons, Angels, Apachis, Bouzers, Angelinas, Killers, Preciouses, Merlins, Annabelles, Buddys, Cocos, Beaus, Tinkerbells and Spikes, etc. are voting?  But not to worry… we don’t need voter ID and there is no voter fraud going on…  So just move along and close your eyes, there is nothing to see here…

A Victory for Republicans, Florida Wins Use of Federal Database to Purge Voters

Easy Things You Can Do to Prevent Voter Fraud

Flashback: Obama Urged Prisoners To Vote For Him

WHAT is Scytl & WHY Should You Be VERY, VERY Concerned?

How Does Team Obama Plan to Steal Election 2012… And What Will You Do to Help Stop It?

I am a babyboomer and empty nester who savors every moment of my past and believes that it is the responsibility of each of us in my generation and Americans in general to make sure that America is as good or even a better place for future generations as it was for us. So far... we haven't done very well!! Favorite Quotes: "The first 50 years are to build and acquire; the second 50 are to leave your legacy"; "Do something that scares you every day!"; "The journey in between what you once were and who you are becoming is where the dance of life really takes place". At age 62 I find myself fighting inoperable uterine Cancer and thanks to the man upstairs and the prayers from so many people including many of my readers from AskMarion and JustOneMorePet... I'm beating it. After losing our business because of the economy and factors related to the re-election of President Obama in 2012 followed by 16-mos of job hunting, my architect-trained husband is working as a trucker and has only been home approximately 5-days a month since I was diagnosed, which has made everything more difficult and often lonely... plus funds are tight. Our family medical deductible is 12K per year for two of us; thank you ObamaCare. But thanks to donations from so many of you, we are making ends meet as I go through treatment while taking care of my father-in-law who is suffering from late stage Alzheimer's and my mother-in-law who suffers from RA and onset dementia as well as hearing loss, for which there are no caretaker funds, as I continue the fight here online to inform and help restore our amazing country. And finally I need to thank a core group of family, friends, and readers... all at a distance, who check in with me regularly. Plus, I must thank my furkids who have not left my side through this fight. You can see them at JustOneMorePet.
View all posts by Ask Marion →
This entry was posted in Wake Up, Watch the Other Hand, Wisdom, You Be the Judge and tagged 2012 Election, animals, Chicago style politics, dirty politics, dirty tricks, dogs, dogs voting, Election 2012, Pets, pets and politics, smoke and mirrors, voter fraud, WND. Bookmark the permalink.