Mitt Romney clinched the Republican presidential nomination last night (Tuesday) with a win in the Texas primary, officially garnering the 1,144 delegates needed to claim the Republican presidential nomination.  It was a triumph of endurance for the candidate who came up short four years ago and had to fight hard this year as voters flirted with a carousel of GOP rivals, all slugging it out and scratching to reach the prize. 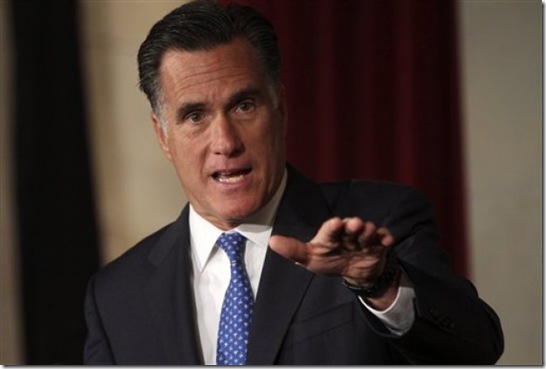 According to The Associated Press count, Romney surpassed the 1,144 delegates needed to win the nomination by winning at least 97 delegates in the Texas primary.

The former Massachusetts governor has reached the nomination milestone with a steady message of concern about the U.S. economy, a campaign organization that dwarfed those of his GOP foes and a fundraising operation second only to that of his Democratic opponent in the general election, President Barack Obama.

Romney is the first Mormon nominated by a major party. His religion has been somewhat less of an issue than it was during his failed bid four years ago; perhaps because the economy is on the forefront of everyone’s mind.  Plus many question President Obama’s honesty about his religion, so believe a Mormon is a definite improvement over a Reverend Wright style Christian or perhaps a closet Muslim.

"We did it!" Romney proclaimed in a message to supporters, noting that "it’s only the beginning."

Romney was not in Texas, however, but in Las Vegas at a major fundraiser hosted by supporter Donald Trump. 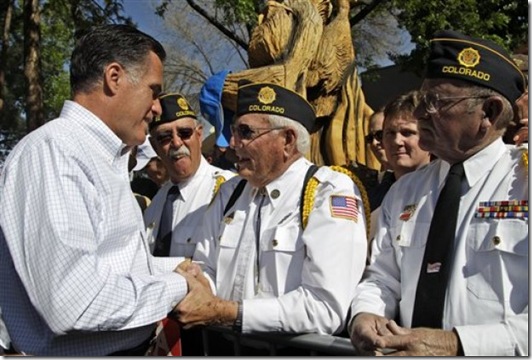 Romney must now fire up those conservatives who still doubt him while persuading swing voters that he can do a better job fixing the nation’s struggling economy than Obama. In Obama, he faces a well-funded candidate with a proven campaign team, but in his favor, in an election year that will be heavily influenced by the negative economy… Obama’s economy.

The message, "President Obama is fundamentally hostile to job creators",  has been a theme of the Romney campaign since he launched his presidential bid. But sensing this as an opportunity to reach a new audience, the campaign planned to highlight Obama’s support for the failed renewable energy company Solyndra, among other private ventures the Obama administration helped support.

"We need to have presidents who understand how this economy works," Romney told reporters Tuesday. "Sometimes I just don’t think he understands what it takes to help people. I know he wants to help, but he doesn’t know what he’s got to do."

Romney’s message and his big day, however, were somewhat overshadowed by real estate mogul Donald Trump and his discredited suggestions that Obama wasn’t born in the United States.  Course others were cheering that Trump had the guts to say it.

Romney spent Tuesday evening at a Las Vegas fundraiser with Trump, who had toyed with the idea of running for president earlier in the election season. Romney says he believes Obama was born in America but has yet to condemn Trump’s repeated insinuations to the contrary.

Both Trump and Romney steered clear of the issue at Tuesday’s, said to have been successful, fundraiser. (Coincidentally, Romney officially released his birth certificate yesterday.)

When asked Monday about Trump’s contentions, Romney said, "I don’t agree with all the people who support me. And my guess is they don’t all agree with everything I believe in." He added, "But I need to get 50.1 percent or more. And I’m appreciative to have the help of a lot of good people."

Texas Republicans also voted in a Senate primary to choose a candidate to run for the seat being vacated by Senator Kay Bailey Hutchison. Lt. Gov. David Dewhurst and state Solicitor General Ted Cruz were headed to a runoff in July.

With about three-fourths of precincts reporting, Dewhurst led with 45 percent of the vote compared to 33 percent for Cruz. Dewhurst, however, fell short of the majority he needed to avoid a runoff. The nominee will be strongly favored to win in November in heavily Republican Texas.

Romney, 65, is clinching the presidential nomination later in the calendar than any recent Republican candidate, but not quite as late as Obama in 2008. Obama clinched the Democratic nomination on June 3, 2008, at the end of an epic primary battle with now Secretary of State Hillary Rodham Clinton. Four years ago, John McCain reached the delegate threshold on March 4, after Romney dropped out of the race about a month earlier.

This year’s primary fight was extended by a back-loaded primary calendar because of new GOP rules that generally awarded fewer delegates for winning a state, changes they seemed to regret as the campaign bogged down.  Plus the Republican electorate seemed to enjoy extending the battle before settling on Romney.

Michelle Bachmann, Rick Perry, Herman Cain, Newt Gingrich, Rick Santorum and yes… Donald Trump all sat at the top the Republican field at some point. Minnesota Rep. And at one point early on, Ron Paul also appeared to have the ability to secure the top spot for a short time.  But Romney outlasted them all, even as some GOP voters and tea party backers questioned his conservative credentials.

Romney responded with a barrage of negative ads against Gingrich in Florida and got a much-needed 14-point win. Romney’s opponents fought back: Gingrich called him a liar, and Santorum said Romney was "the worst Republican in the country" to run against Obama.

Gingrich and Santorum assailed Romney’s work at Bain Capital, the private equity firm he co-founded, saying the firm sometimes made millions at the expense of workers and jobs. It is a line of attack that Obama has promised to carry all the way to November.

On Feb. 7 Santorum swept all three contests in Missouri, Colorado and Minnesota, raising questions about Romney’s status as the front-runner. After a 17-day break in the voting, Romney responded with wins in Arizona, Michigan and Washington state before essentially locking up the nomination on March 6, this year’s version of Super Tuesday.

Romney has already been in general-election mode for weeks, raising money and focusing on Obama, largely ignoring the primaries since his competitors dropped out or stopped campaigning. Santorum suspended his campaign April 10, and Gingrich left the race a few weeks later.  Texas Rep. Ron Paul said on May 14 he would no longer compete in primaries, though his supporters are still working to gain national delegates at state conventions.

Both Santorum and Gingrich initially offered tepid endorsements of Romney as the left the race but Gingrich is now actively promoting Romney’s campaign.

Among those in the crowd in Vegas last night: Former House Speaker Newt Gingrich, who joined his former rival on the trail for the first time since dropping his own bid for the Republican nomination last month.

While Gingrich didn’t speak at the fundraiser, he talked to reporters ahead of the event, defending Romney’s muted reaction to Trump’s birther conspiracies.

"Gov. Romney is not distracted, the Republican Party is not distracted. We believe this is an American-born, job-killing president," Gingrich told reporters, per the Los Angeles Times. "Other people may believe that he was born somewhere else and still kills jobs, but that’s an argument over background. The key fact is for any American worried about the economy, Obama is a job-killing president."

Rich Galen, a Republican strategist who has been unaligned in the 2012 race thus far, said the long, sometimes nasty primary fight should have helped Romney fine-tune his campaign organization so it can operate effectively in the general election. Galen doesn’t, however, think it was relevant in toughening up Romney for the battle against Obama.  Not quite sure how that follows, but we shall see!

"Romney’s been running for president for six years. He is as good a candidate as he’s ever going to be," Galen said. "Whatever you say about him, he was better than everybody else in the race."

So the general now officially begins!  Game on….

Romney’s official announcement sent out to his online supporters:

Tonight, we surpassed 1,144 delegates and secured the nomination. I am grateful and humbled by your support through this process. We did it!

This has been an extraordinary journey. And yet it’s only the beginning.

Now all Republicans can move forward toward our convention in Tampa. There, we will stand united as a party with a winning ticket for America. Ours will be a campaign to unite every American who knows in his or her heart that we can do better.

There’s much to be done by November 6th – but with your help, we will get it done!

Thank you for standing with me.
Mitt Romney

The Chicago Gang Goes After Romney

Romney Should Seek a Big Win

It’s Game On: Should Mitt Take the Gloves Off?

I am a babyboomer and empty nester who savors every moment of my past and believes that it is the responsibility of each of us in my generation and Americans in general to make sure that America is as good or even a better place for future generations as it was for us. So far... we haven't done very well!! Favorite Quotes: "The first 50 years are to build and acquire; the second 50 are to leave your legacy"; "Do something that scares you every day!"; "The journey in between what you once were and who you are becoming is where the dance of life really takes place". At age 62 I find myself fighting inoperable uterine Cancer and thanks to the man upstairs and the prayers from so many people including many of my readers from AskMarion and JustOneMorePet... I'm beating it. After losing our business because of the economy and factors related to the re-election of President Obama in 2012 followed by 16-mos of job hunting, my architect-trained husband is working as a trucker and has only been home approximately 5-days a month since I was diagnosed, which has made everything more difficult and often lonely... plus funds are tight. Our family medical deductible is 12K per year for two of us; thank you ObamaCare. But thanks to donations from so many of you, we are making ends meet as I go through treatment while taking care of my father-in-law who is suffering from late stage Alzheimer's and my mother-in-law who suffers from RA and onset dementia as well as hearing loss, for which there are no caretaker funds, as I continue the fight here online to inform and help restore our amazing country. And finally I need to thank a core group of family, friends, and readers... all at a distance, who check in with me regularly. Plus, I must thank my furkids who have not left my side through this fight. You can see them at JustOneMorePet.
View all posts by Ask Marion →
This entry was posted in Knowledge Is Power, News and politics, Politics and tagged 2012 Election, Donald Trump, Election 2012, game on, General Election, GOP, Mitt Romney, Mitt Romney 2012, Romney clinches GOP nomination, Texas. Bookmark the permalink.