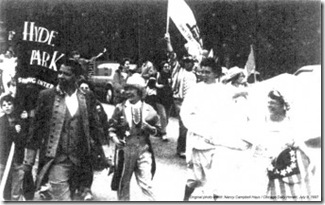 A 1997 photograph has been unearthed showing Barack Obama marching in a tea-party-style parade, long before the tax-cutting, patriotic movement began, and despite Obama’s apparent disdain for “teabaggers,” as he has termed them.

“Yes, that really is Barack Obama wearing a regimental coat and carrying a tricorn hat in his hand,” writes John Sexton of Breitbart.com, which is publishing the photo. “And that flag behind him really is a Gadsden flag, with its serpent and its ‘Don’t Tread On Me’ slogan.”

Sexton notes, “In 2009, President Barack Obama reportedly called members of the tea party ‘teabaggers.’ It turns out that our fourth greatest president, first in so many things, may have been the first ‘teabagger’ himself.”

Breitbart.com explains the forgotten photo has been in plain view for fifteen years, explaining it appeared on the front page of Chicago’s Hyde Park Herald on July 9th, 1997, snapped by photographer Nancy Campbell Hays.

It says the original picture, which was donated to the University of Chicago, isn’t yet available for public view, and the image obtained by Breitbart News was very dark, and so it was lightened in Photoshop.

The Herald’s caption below the photograph read:

Breitbart points out neither Democrats nor the media have been especially kind to the tea party in recent years:

“MSNBC’s Rachel Maddow was one of many who saw mockery of the ‘teabaggers’ as the first recourse. (The word was used so often by liberals in 2009 that Oxford made it a Word of the Year finalist.) Liberal sites like Talking Points Memo presented attendees who dressed up the way Obama did above as weirdoes. The ever-predictable Bill Maher got hoots from his audience when he donned his own tricorn hat (complete with dangling tea bags) to bash the Tea Party on TV.

“President Obama blamed the ‘teabaggers’ for his failures, according to Jonathan Alter’s book ‘The Promise: President Obama, Year One,’ complaining that his own 2009 stimulus ‘helped to create the tea-baggers and empowered that whole wing of the Republican Party to where it now controls the agenda for the Republicans.’ (Vice President Joe Biden is blaming them still.)

Neither Democrats nor the media have been particularly kind to the Tea Party. There is hardly space to go through all the times the Tea Party has been compared to terrorists (including by the Vice President) or fascists, or the many times it has been accused of racism by progressives in supposedly mainstream news outlets. That’s a book-length story of its own.

“Yet in the dramatic battles over trumped up charges of Tea Party racism and extremism, Obama never mentioned his own ‘Tea Party’ episode — and neither has anyone in the media, even as Obama’s allies and friends on the left ridiculed the Tea Party for seeking to make the same symbolic connections to the country’s founding.”

Sexton noted: “Since 2009, the ridicule of tea party signs and costumes has been so constant from Obama, the mainstream media, and the left that Glenn Beck encouraged people to stop dressing up so as not to give them an excuse.”

Given the photo above, it is certainly a good time to think back upon some of the ridicule Tea Party members were forced to endure for evoking the Revolutionary War era by their dress and choice of symbols.

With most politicians, wearing colonial dress for a public celebration like the 4th of July would be considered a bit colorful, but not extraordinary.

In Obama’s case, it’s more like proof of hypocrisy.

Since 2009, the ridicule of Tea Party signs and costumes has been so constant from Obama, the mainstream media, and the left that Glenn Beck encouraged people to stop dressing up so as not to give them an excuse.

It didn’t work, though. The NAACP still saw the costumes as part of a disturbing, nationalist impulse:

The Revolutionary War-era costumes, the yellow “Don’t tread on me” Gadsden flags from the same era, the earnest recitals of the pledge of allegiance, the over-stated veneration of the Constitution, and the defense of “American exceptionalism” in a world turned towards transnational economies and global institutions: all are signs of the over-arching nationalism that helps define the Tea Party movement.

So, by the NAACP’s logic, it would appear that Barack Obama is an over-arching nationalist, and perhaps a racist, anti-Semitic nativist as well.

That, or the left has been engaged in three years of juvenile character assassination to protect a guy who never got the memo about the worrisome deeper meaning of regimental coats and tricorner hats.

h/t to Joe Kovacs at WND

Want to see what REAL tea partiers look like? Take a look at the amazing photos in “Don’t Tread On US,” with a special foreword by Chuck Norris!

I am a babyboomer and empty nester who savors every moment of my past and believes that it is the responsibility of each of us in my generation and Americans in general to make sure that America is as good or even a better place for future generations as it was for us. So far... we haven't done very well!! Favorite Quotes: "The first 50 years are to build and acquire; the second 50 are to leave your legacy"; "Do something that scares you every day!"; "The journey in between what you once were and who you are becoming is where the dance of life really takes place". At age 62 I find myself fighting inoperable uterine Cancer and thanks to the man upstairs and the prayers from so many people including many of my readers from AskMarion and JustOneMorePet... I'm beating it. After losing our business because of the economy and factors related to the re-election of President Obama in 2012 followed by 16-mos of job hunting, my architect-trained husband is working as a trucker and has only been home approximately 5-days a month since I was diagnosed, which has made everything more difficult and often lonely... plus funds are tight. Our family medical deductible is 12K per year for two of us; thank you ObamaCare. But thanks to donations from so many of you, we are making ends meet as I go through treatment while taking care of my father-in-law who is suffering from late stage Alzheimer's and my mother-in-law who suffers from RA and onset dementia as well as hearing loss, for which there are no caretaker funds, as I continue the fight here online to inform and help restore our amazing country. And finally I need to thank a core group of family, friends, and readers... all at a distance, who check in with me regularly. Plus, I must thank my furkids who have not left my side through this fight. You can see them at JustOneMorePet.
View all posts by Ask Marion →
This entry was posted in Knowledge Is Power, News and politics, Politics, You Be the Judge and tagged BHO, Chicago, Chicago politics, media bias, Obamaland, parades, tea party, Tea Party Activists, tea party effect, tea party movement. Bookmark the permalink.