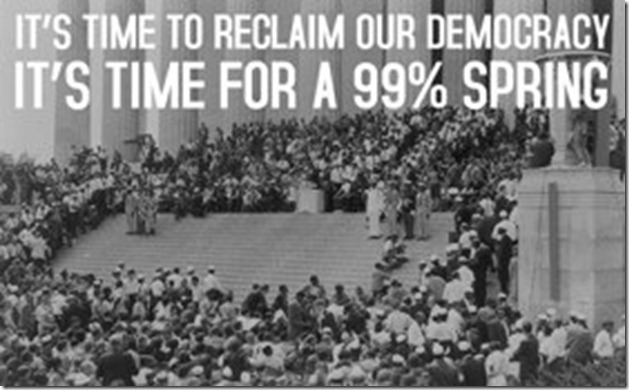 Well, look who’s sprouting out of the radical ground! It reads like a who’s who of Communists…

99% Spring Action Training
We’re at a crossroads as a country. In recent years, millions have lost their jobs, homes have been foreclosed, and an unconscionable number of children live in poverty. We have to stand up to the people who caused of all this and confront the rampant greed and deliberate manipulation of our democracy and our economy by a tiny minority in the 1%.

Inspired by Occupy Wall Street and the fight for workers in Madison, Wisconsin, the 99% will rise up this spring. In the span of just one week, from April 9-15, 100,000 people will be trained to tell the story of what happened to our economy, learn the history of non-violent direct action, and use that knowledge to take action on our own campaigns to win change.

We’ll gather for trainings in homes, community centers, places of worship, campuses, and public spaces nationwide to learn how to join together in the work of reclaiming our country through sustained non-violent action.

Will you rise with us and join a 99% Spring action training?

Host your own 99% Spring Action Training event
Right now, there are 900 gatherings planned.

Already hosting or signed up for an event? We can e-mail you a link to your tools.

MoveOn.org Civic Action is hosting the online event registration process but is not responsible for the content or programming of the trainings or for the planning or organization of any specific actions. The 99% Spring is a collaborative effort between many organizations to train over 100,000 Americans in the basics of nonviolent direct action—not an electoral campaign.

They’re baaack… the American Bolsheviks. Can’t you just feel the violence in the spring air? Communism in bloom – just look at the list of them above. Occupy Wall Street is coming out of hibernation just as we predicted and they are good to go, ready for revolution and chaos. The American Spring is about to be born. Stay as far away from these useful idiots as you can.

The movement kicked off last Friday and was dubbed National Occupy Washington (NOW). It sprung into action with a march on the Environmental Protection Agency – accompanied by a brace of alpacas, a large polar bear and an even larger blow-up of planet Earth. I kid you not… But, before you write them off as looney (and they are), remember they are also dangerous and violent and coming to your town and neighborhood.

“This is just the tip of the iceberg,” Kevin Zeese, one of the coorganizers, says by cell phone while marching under the overcast capital skies.

“We are preparing to give people the skills and training they need for longer and more powerful involvement,” he says, adding, “the tents were just a tactic, not the purpose of this movement.”

While many have seen the disappearance of the signature tents from downtown parks from New York to Oakland and Boston to Los Angeles as a sign that OWS had lost both its appeal and vigor, Mr. Zeese counters that long-term social campaigns such as the civil rights movement unfolded over years and took many forms as they progressed.

“We may be less visible, but we are just getting started,” Zeese says.

Spring is inspiring other OWS-related activism as well, including the 99 Percent Spring, a coalition of progressive groups launching large-scale nonviolence training for its members and a national call for a general strike on May 1.

OWS is in transition, says Mark Tatge, journalism professor at DePauw University in Indiana. “I don’t see it dying, I see it morphing into something beyond just an attack on the big banks or Wall Street,” he says via e-mail, adding that the seeds of this movement can be seen elsewhere.

“There is really more than one ‘Occupy Wall Street’ movement underway,” says Professor Tatge, pointing to coalitions of groups mobilizing over issues such as immigration, fights over creationism in schools, a fierce battle over health care now before the Supreme Court, and the recent shooting of an unarmed teen in Florida.

“I expect more, not less, political activism over the next five years,” he says. “Most of this is because of the widening split between the haves and have-nots in this country.”

Class warfare at its finest. The Marxists are gearing up to attack us, possibly physically as well as philosophically, on every major front. They are coming and don’t discount them; that would be a fatal mistake. Almost as bad as joining them. Do I need to remind everyone what happens to useful idiots once they have served their purpose? Death, death and death. No cake. All of these hapless fools are looking for a free lunch and in the end, all they will get is a lead sandwich. Nothing is ever free.

That is Utopia’s free lunch, a magic dance through the air, arm in arm with Wile E Coyote that ends when we realize there’s nothing underneath us and someone has stolen our shoes. It’s the magic of idealism mingled with corruption, dissonant musical instruments playing a mad waltz that ends with everyone falling down. A reminder that we can make a better world, but not by closing our eyes and believing in free lunches and fairies.

So, are you ready for the American Bolsheviks – The Second Act? I hear it’s to die for. They are lying just like the Russian Communists did. They characterized themselves as the majority in Russia then, just like they are here, trying to recreate the Bolshevist meme – it wasn’t true then and it’s not true now. Behold the violent minority! Or, we can get rid of these freaks and work industriously at restoring the Constitution, smaller government, way less debt and the freedom to succeed or fail without big brother breathing down our necks. Hmmm, decisions, decisions…

I am a babyboomer and empty nester who savors every moment of my past and believes that it is the responsibility of each of us in my generation and Americans in general to make sure that America is as good or even a better place for future generations as it was for us. So far... we haven't done very well!! Favorite Quotes: "The first 50 years are to build and acquire; the second 50 are to leave your legacy"; "Do something that scares you every day!"; "The journey in between what you once were and who you are becoming is where the dance of life really takes place". At age 62 I find myself fighting inoperable uterine Cancer and thanks to the man upstairs and the prayers from so many people including many of my readers from AskMarion and JustOneMorePet... I'm beating it. After losing our business because of the economy and factors related to the re-election of President Obama in 2012 followed by 16-mos of job hunting, my architect-trained husband is working as a trucker and has only been home approximately 5-days a month since I was diagnosed, which has made everything more difficult and often lonely... plus funds are tight. Our family medical deductible is 12K per year for two of us; thank you ObamaCare. But thanks to donations from so many of you, we are making ends meet as I go through treatment while taking care of my father-in-law who is suffering from late stage Alzheimer's and my mother-in-law who suffers from RA and onset dementia as well as hearing loss, for which there are no caretaker funds, as I continue the fight here online to inform and help restore our amazing country. And finally I need to thank a core group of family, friends, and readers... all at a distance, who check in with me regularly. Plus, I must thank my furkids who have not left my side through this fight. You can see them at JustOneMorePet.
View all posts by Ask Marion →
This entry was posted in Knowledge Is Power, Politics, Wake Up, Watch the Other Hand and tagged 99%, American Bolsheviks, American Progressives, American Spring, Communists, creating chaos, creating crisis, manipulation of the public, MoveOn.org, Obamaland, occupy, Occupy Wall Street, radicals, smoke and mirrors. Bookmark the permalink.