Friday March 23rd, 2012 is 2nd-year anniversary of the signing of the Affordable Care Act, ObamaCare, into law,  Monday March 26th is the day the states take their case against the ObamaCare individual mandate (as well as the full law itself) to the Supreme Court of the United States (SCOTUS).  It could end up being the day that saved America, or the day the Supreme Court helped America sink further into debt and further down the road toward Socialism.

If SCOTUS strikes down the individual mandate, ObamaCare will implode and die, giving America another chance at both surviving and re-addressing healthcare and Medicare.  If SCOTUS does not strike down the mandate, we will get a second chance to overturn the bill that will be the final nail in the coffin of American freedom in November 2012.  After that the only thing that will save us from ourselves is a total financial collapse.

Government-controlled/run healthcare is the jewel socialism and the most Progressive president and congress America has ever had crammed this bill down the throats of the American people without most of them ever realizing what happened. They even managed to force both the House and Senate to vote on this program, several times each, without reading the bills. Think about it.

There was a small group of people, the Tea Party and other patriots, who were engaged and did read those bills (at least one version), reviewed and  shared their findings, spoke out and traveled to Washington D.C. to stand up. I was one of those people… but nobody in Washington and not enough people in America listened.

Nancy Pelosi said, We have to pass the bill (without reading it… because there was not time) to find out what was in it?”.   They did… and now we, the American people, are beginning to find out what is in it… in dribs and drabs… one bad provision at a time. ObamaCare is fraught with broken promises and misrepresentations:  Obamacare’s Top 5 Broken Promises

Well, we now have a group of doctors who have come together to get out the truth, the whole truth on how Obamacare will impact the health and welfare of your loved ones at: www.AmericanDoctors4Truth.org.  It is information absolutely vital for every American, especially if the SCOTUS does not over the full law or at least the individual mandate.

Well here is the response to that ad by www.AmericanDoctors4Truth.org based on the information of what really is in ObamaCare, now coming out. Please watch:

It helps make the point by point case against ObamaCare.

My question is why nobody in Washington has read the full ObamaCare Bill in the meantime after it was passed and then spoken out… yelling from the rooftops?  Why?

Recently several important provisions have come to light.  Below are back-up articles and information for those who did not read the bill or at least the reviews of those who did:

The Obamacare Second Anniversary: No Gift for Women

What is the real purpose of birth control? Why is all of this so important to progressives?

Costs and Funding of ObamaCare:

Updated: 5-Reasons Obama is Losing the Contraceptive Mandate Battle… But Could be Winning the Power Grab Mandate War

I was told by a friend whose husband works for one of our major U.S. hospitals that the HR department posts upcoming news on a weekly basis on their bulletin boards throughout the hospital. Late last week a posting went up stating:

PER THE U.S. FED GOV’T, AS OF APRIL 24, 2013 THERE WILL BE NO CHEMO/RADIATION/MEDICATIONS/FOR ALL PERSONS DIAGNOSED WITH CANCER AT AGE 76 OR OLDER. SURGICAL PROCEDURES WILL BE DONE ONLY IF THE SURGEONS CAN WITH HIGH CERTAINTY REMOVE IT ALL.

Thinking About Selling Your House After 2012?

Foundry:  The 10 Terrible Provisions of Obamacare You May Not Have Heard Of

Obamacare includes such a variety and volume of negative policies that it’s hard to keep track of them all. Here is a list of 10 terrible provisions that every American should be aware of:

Again, we only have a few chances of getting rid of ObamaCare, 4 if you consider a total financial collapse:

If none of the first three above is done, the government will gain control of an additional 6 to 10% of the U.S. economy through ObamaCare and the tentacles will go so deep and wide that it can never be unwound after 4-more years of Obama and his radical team. Government controlled healthcare is always the crown jewel and center of socialism, especially with what is written into the Affordable Care Act or ObamaCare.  And if you realize what is in this bill and what has been done, it is also obvious that Nancy Pelosi,  Harry Reid and President must be ousted or shamed into quitting!! 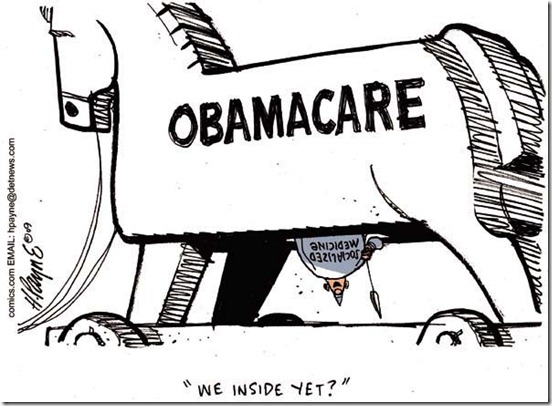 Realizing how unpopular ObamaCare is the President and the White House have been very quiet about the 2-year anniversary, but Nancy Pelosi held a celebration in Washington on Thursday.

The SCOTUS decision is going to be a nail-bitter.  Many feel that the individual mandate will be struck down in a 5 to 4 decision; the 4-conservatives on the bench plus Judge Kennedy against the 4-liberals on the bench, which include Sotomayor and Kagen appointed by Obama just for this fight, even though Justice Kagan breaks federal law in order to force ObamaCare on the American people.  Ron Paul Suspects Supreme Court Will Rule “Monstrosity” Obamacare Constitutional and Charles Krauthammer said on the first day of hearings that the Supreme Court does not like to overturn or cause the overturning of large pieces of legislation.  However, even some of the liberal Supreme Court Judges Appear Skeptical On Obama’s Defense Of ObamaCare  We shall see.  And unwinding this monster will be a mess no matter what SCOTUS decides or which method with use.

On a side note, we should also remember that during the 2008 campaign, Obama vehemently opposed Hillary Clinton’s reform plan because of its inclusion of mandate. Four years later, his administration is in court defending the precise policy he opposed. This was not a minor or superficial distinction between Obama and his former Democratic rival; it was one of the brightest lines Obama drew to separate the two campaigns’ (relatively similar) approaches to government expansionism. As this Buzzfeed video demonstrates, this was a point candidate.

Listen to Audio of Supreme Court over Obamacare

I am a babyboomer and empty nester who savors every moment of my past and believes that it is the responsibility of each of us in my generation and Americans in general to make sure that America is as good or even a better place for future generations as it was for us. So far... we haven't done very well!! Favorite Quotes: "The first 50 years are to build and acquire; the second 50 are to leave your legacy"; "Do something that scares you every day!"; "The journey in between what you once were and who you are becoming is where the dance of life really takes place". At age 62 I find myself fighting inoperable uterine Cancer and thanks to the man upstairs and the prayers from so many people including many of my readers from AskMarion and JustOneMorePet... I'm beating it. After losing our business because of the economy and factors related to the re-election of President Obama in 2012 followed by 16-mos of job hunting, my architect-trained husband is working as a trucker and has only been home approximately 5-days a month since I was diagnosed, which has made everything more difficult and often lonely... plus funds are tight. Our family medical deductible is 12K per year for two of us; thank you ObamaCare. But thanks to donations from so many of you, we are making ends meet as I go through treatment while taking care of my father-in-law who is suffering from late stage Alzheimer's and my mother-in-law who suffers from RA and onset dementia as well as hearing loss, for which there are no caretaker funds, as I continue the fight here online to inform and help restore our amazing country. And finally I need to thank a core group of family, friends, and readers... all at a distance, who check in with me regularly. Plus, I must thank my furkids who have not left my side through this fight. You can see them at JustOneMorePet.
View all posts by Ask Marion →
This entry was posted in Dumbing Down of America, Economy and Money, Health and wellness, Knowledge Is Power, News and politics, Patriotism, Politics, Wake Up, Watch the Other Hand, Wisdom and tagged abortion, Affordable Care Act, death panels, financial collapse, fundamental transformation of America, government-run healthcare, jewel of socialism, Nancy Pelosi, ObamaCare, patriots, progressivism, rationing, read the bills, SCOTUS, Socialism, socialized medicine, stand-up America, tea party movement. Bookmark the permalink.