On the Road to Armageddon – Moving Ragnarok to the Middle East

The headlines today are full of the Middle East spinning violently apart and threatening to take the entire planet with them. The Doomsday Clock is relentlessly ticking towards midnight and the nuclear Armageddon we have all dreaded our entire lives is about to become reality. And what does Obama do? Why, he gleefully helps it along of course. It suits his Marxist goals and brings chaos into the mix to hurry up a new, sinister utopia, while Israel sits with the sword of Damocles hanging over their heads in a solemn nod to the coming worldwide Caliphate.

We are perilously close to the point of no return on Iran’s nukes. Israel has managed to stave off their progress somewhat by taking down a plant in Syria and by unknown others taking out nuclear scientists and letting the Stuxnet Worm do its damage.

Israel will need to make a major move soon if they are to have a prayer of taking out Iran’s capabilities – in fact, it may already be too late. They have made the tactical error of listening to the radical Progressive leadership in DC and it may cost them everything. No American hero on a white steed will ride to the rescue this time. Panetta has made it abundantly clear – R2P for Syria is a possibility, but hands off Iran. Unless of course, Obama has to have an Iranian war for reelection, in which case, I believe that Panetta will make it as bloody as possible, with Israel being the sacrificial lamb on the Marxist altar of a New World Government. The elite leadership in the US is no longer a friend to Israel – or at least one they can count on. Sadly, they are on their own as they have always been and I believe the evil that is brewing across the globe is bearing down on them. We will all pay a horrible price if we let Israel be savaged by the Iranians and radical Islam, backed by Russia and China.

The Ayatollah came out today and last week through the Internet and in fiery speeches called again for the destruction of Israel and the killing of all Jews. The Iranian government has also laid out a legal and religious doctrine that includes wiping out Israeli assets and Jewish people worldwide.

Calling Israel a danger to Islam, the conservative website Alef, with ties to Iran’s supreme leader, Ayatollah Ali Khamenei, said the opportunity must not be lost to remove “this corrupting material. It is a ‘jurisprudential justification” to kill all the Jews and annihilate Israel, and in that, the Islamic government of Iran must take the helm.”

The article, written by Alireza Forghani, a conservative analyst and a strategy specialist in Khamenei’s camp, now is being run on most state-owned conservative sites, including the Revolutionary Guards’ Fars News Agency, showing that the regime endorses this doctrine.

Because Israel is going to attack Iran’s nuclear facilities, Iran is justified in launching a pre-emptive, cataclysmic attack against the Jewish state, the doctrine argues.

And the rhetoric is heating up explosively day by day. This won’t go on much longer before something boils over. Tiny Israel will have no choice but to preemptively protect herself or try to save herself afterwards.

Take a look at the slew of events making headlines recently and ask yourself what they portend:

· 400 are slaughtered in Syria, while the UN tries to mandate a resolution. Russia and China block the resolution. And to sweeten the poison, Syria is close to having a civil war break out.

· Hard-line Islamists have taken control of Kuwait’s parliament in their elections, following in the footsteps of Tunisia and Egypt.

· Libya – whom we cheered on in the Arab Spring – had their militia torture their Ambassador to France to death after pulling out his toe nails. Yep, this is what democracy looks like.

· Iranian war ships have docked in a Saudi port. Iranian naval ships docked on Saturday in the Saudi port city of Jeddah on a mission to project the Islamic republic’s “power on the open seas.”

· Iran has begun mass production of an anti-ship cruise missile.

· Egypt on Sunday referred 43 NGO workers, including 19 Americans, to trial before a criminal court for allegedly using illegal foreign funds to foment unrest.

· Iran’s Revolutionary Guard began military exercises Saturday in the country’s south, the latest show of force after threats to close the strategic Strait of Hormuz in retaliation for tougher Western sanctions.

· Israeli facilities worldwide are on high alert against an attack from Iran, according to an internal security document obtained by ABC News.

“We predict that the threat on our sites around the world will increase … on both our guarded sites and ‘soft’ sites,” read a letter by the head of security for the Consul General for the Mid-Atlantic States, ABC News reported. Guarded sites are government facilities like embassies and consulates; “soft sites” are Jewish synagogues, schools and community centers.

· Iran is warning of a coming ‘great event.’ Since they believe that 2012 is the return of the Mahdi, you do the math.

So, whether you call it Armageddon or Ragnarok, Iran wants to bring it on and fast. It’s the end of the world baby and they’re feeling fine. There is a reason the US does not show up in end times eschatology. Will we write our own future and defend God’s chosen people? Or, will we slink into oblivion and fall to the enemy? Billions are dying to know, or getting ready to any way. 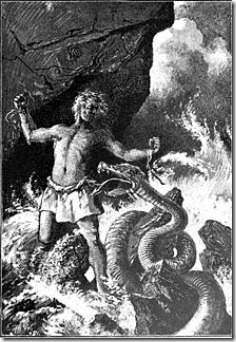 Loki breaks free at the onset of Ragnarök (by Ernst H. Walther, 1897)

I am a babyboomer and empty nester who savors every moment of my past and believes that it is the responsibility of each of us in my generation and Americans in general to make sure that America is as good or even a better place for future generations as it was for us. So far... we haven't done very well!! Favorite Quotes: "The first 50 years are to build and acquire; the second 50 are to leave your legacy"; "Do something that scares you every day!"; "The journey in between what you once were and who you are becoming is where the dance of life really takes place". At age 62 I find myself fighting inoperable uterine Cancer and thanks to the man upstairs and the prayers from so many people including many of my readers from AskMarion and JustOneMorePet... I'm beating it. After losing our business because of the economy and factors related to the re-election of President Obama in 2012 followed by 16-mos of job hunting, my architect-trained husband is working as a trucker and has only been home approximately 5-days a month since I was diagnosed, which has made everything more difficult and often lonely... plus funds are tight. Our family medical deductible is 12K per year for two of us; thank you ObamaCare. But thanks to donations from so many of you, we are making ends meet as I go through treatment while taking care of my father-in-law who is suffering from late stage Alzheimer's and my mother-in-law who suffers from RA and onset dementia as well as hearing loss, for which there are no caretaker funds, as I continue the fight here online to inform and help restore our amazing country. And finally I need to thank a core group of family, friends, and readers... all at a distance, who check in with me regularly. Plus, I must thank my furkids who have not left my side through this fight. You can see them at JustOneMorePet.
View all posts by Ask Marion →
This entry was posted in Knowledge Is Power, Politics and tagged Armageddon, Caliphate, creating chaos, elites, End Times, gloabal elites, global Marxism, Iran, Israel, Leon Panetta, Middle East, Muslim Brotherhood, NewsMax, NWO, Syria, UN, WND. Bookmark the permalink.