Bad Dreams In The Night 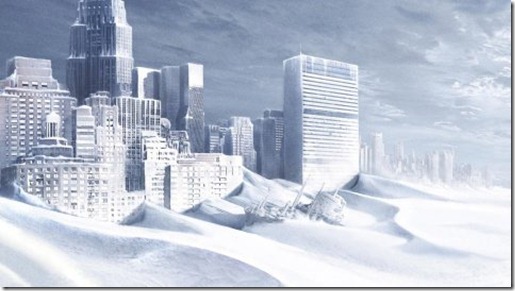 A terrifying new concept has recently reemerged in the global climatology fight and the clarion call is heralded by a book that Zombie just read: The Weather Conspiracy: The Coming of the New Ice Age.

Just another ploy to spread global Marxism – we just HAVE TO do the following (rinse, repeat and gag):

· Increase our reliance on alternative energy sources and stop using so much oil and other carbon-based fuels;

· Adopt energy-efficient practices in all aspects of our lives, however inconvenient;

· Impose punitive taxes on inefficient or polluting activities to discourage them;

· Funnel large sums of money from developed nations like the U.S. to Third World nations;

· In general embrace all environmental causes.

Sound familiar? Al Gore rides again in perpetuity evidently and has mated in an unholy alliance with Cass Sunstein and Progressives worldwide to force us into one global collective hell. Not surprised in the least. Zombie’s view of the whole scenario says it best:

In order to weaken and eventually destroy the existing industrialized nations, we must devise an ecological “crisis” so severe that only voluntary economic suicide can solve it; and if this first crisis doesn’t materialize as planned, then devise another, and another, even if they flatly contradict our previous claims.

These elitists will not stop until they have a crisis that we all must submit to so they can have their way with us and grab the power and fortune they have dreamed of, while putting the riffraff worldwide in their place as subjugates once and for all. A New World Order of slaves and a ruling class – ride the Wayback Machine to medieval times, only on steroids with a heaping side of eugenics for all.

Read Zombie’s latest: The Coming of the New Ice Age: End of the Global Warming Era? Bad dreams in the night of a purposely created disaster/emergency to force Americans to their knees, haunts me on a nightly basis. You can only look at evil so long before it takes its toll.

Climatologists: Global Cooling on the Horizon

I am a babyboomer and empty nester who savors every moment of my past and believes that it is the responsibility of each of us in my generation and Americans in general to make sure that America is as good or even a better place for future generations as it was for us. So far... we haven't done very well!! Favorite Quotes: "The first 50 years are to build and acquire; the second 50 are to leave your legacy"; "Do something that scares you every day!"; "The journey in between what you once were and who you are becoming is where the dance of life really takes place". At age 62 I find myself fighting inoperable uterine Cancer and thanks to the man upstairs and the prayers from so many people including many of my readers from AskMarion and JustOneMorePet... I'm beating it. After losing our business because of the economy and factors related to the re-election of President Obama in 2012 followed by 16-mos of job hunting, my architect-trained husband is working as a trucker and has only been home approximately 5-days a month since I was diagnosed, which has made everything more difficult and often lonely... plus funds are tight. Our family medical deductible is 12K per year for two of us; thank you ObamaCare. But thanks to donations from so many of you, we are making ends meet as I go through treatment while taking care of my father-in-law who is suffering from late stage Alzheimer's and my mother-in-law who suffers from RA and onset dementia as well as hearing loss, for which there are no caretaker funds, as I continue the fight here online to inform and help restore our amazing country. And finally I need to thank a core group of family, friends, and readers... all at a distance, who check in with me regularly. Plus, I must thank my furkids who have not left my side through this fight. You can see them at JustOneMorePet.
View all posts by Ask Marion →
This entry was posted in Knowledge Is Power, News and politics, Politics, Self-Reliance, Preparedness and Survival, Wake Up, Watch the Other Hand, Wisdom and tagged Al Gore, Cass Sunstein, climate, climate change, conspiracies, creating chaos, creating crisis, elitism, energy, global Marxism, Global Warming, Henry Kissenger, Ice Age, prepardness, Weather. Bookmark the permalink.

1 Response to Bad Dreams In The Night