Regardless of what they told you in school, FDR sucked 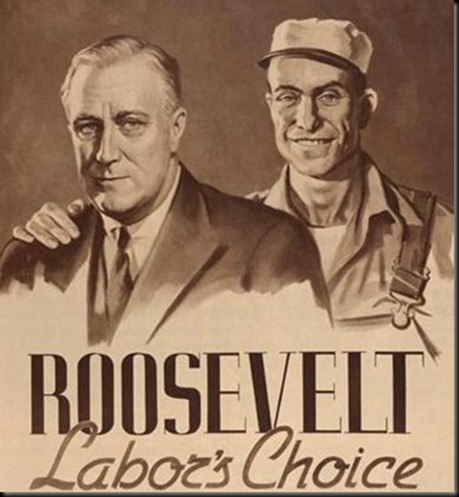 Newt Gingrich once said that FDR was his favorite president of the twentieth century, and perhaps of all American history. Newt says he is conservative, so that would be like somebody saying they are Christian, but their favorite angel is Lucifer.

Even if I didn’t know anything else about his history that alone tells me everything I need to know about Newt. Newt is a historian. He’s not stupid. He knows better.

EDIT: This was just pointed out to me, that the soundbyte I heard was Newt talking about “Most Effective Leader” as opposed to “Best”. Fair enough. That said, FDR still sucked and the post stays.

However most people don’t know any better. I hate when people who know jack squat about history tell me how awesome FDR was. I can see why though. Any high school history textbook has FDR down as Super President. All students know was that FDR was that nice old man in a wheelchair that had fireside chats, who then kicked Hitler’s ass. Of course, academics are usually on the left, so why would they malign one of their folk heroes with pesky things like reality?

FDR was not a great president. The legacy he left behind was one of bloated nonsense that we are still suffering from today. Like our current president (FDX), he moved in on a crisis, and used it as an excuse to have the country take a massive left turn.

The Great part of the Great Depression was a result of his policies. Everyone else in the world came out of the depression before we did. The Weimar friggin’ Republic came out of it faster than we did. Remember the place with the wheelbarrows of Retenmarks to buy a loaf of bread? Yeah, that place pulled up faster than us. America’s government meddled too much in industry and finance to let a natural recovery happen. We were too busy fixing prices, burning crops, and spending money on make-work projects. (you should have heard my grandpa go off on the W.P.A. It was many years before I learned that it didn’t actually stand for We Poke Along).

FDR was so in favor of freedom, justice, and the American way, that when the Supreme Court began striking his socialist policies down as unconstitutional, he attempted to destroy the separation of powers by stacking the Supreme Court with more of his handpicked justices. The whole purpose of three branches of government was to keep one from becoming tyrannical. Think about that. FDR tried to destroy one of the fundamental elements of our constitutional government.

His foreign policy sucked. Period. FDR personally thought Mussolini was a swell guy. He handled Japan about as well as Obama is handling Iran.

On a personal level, FDR was such a loathsome human being that he couldn’t even keep a running mate, but he was fairly loyal to his mistresses. But on that count, I can’ t really blame him, because from all accounts his wife was a frigid ice queen that was “disgusted by the touch of a man”.

He was known for giving good speeches. Keep in mind that this was at the dawn of radio and he was the first president to ever take advantage of that medium. Americans were so excited by radio that FDR could have read out of a phone book for ten minutes and everyone still would have tuned in to listen.

I’ve written two books set in an alternative 1930s, so I’ve had to do a lot of research into that time period. The worst, most soul sucking, obnoxious part of that research has been listening to or reading anything by FDR. Knowing what we know now, and the results of his experiments in social engineering, make me grind my teeth.

When I mentioned my opinion of Newt’s pick for favorite president on a web forum earlier, someone pointed out that Newt specified that he liked FDR more in some periods than in others… What, the early parts where his big government programs ruined the economy, or the middle part where his foreign policy didn’t do crap to prevent the biggest war in history, or the later part where he threw over a hundred thousand Americans into concentration camps?

But remember kids, it is Republicans that are racist and don’t care about civil liberties. Sure, the Democrat’s greatest hero took something like a hundred and forty thousand men, women, and children, ripped them from their homes with no due process or evidence of guilt, confiscated all their homes, property, and businesses, and then interred them in desolate camps in the desert for several years.

The same media that has an absolute come apart over civil liberties because the Bush administration water boarded a couple of terrorists, picks FDR as their Man of The Century.

I used to live next to Topaz Mountain. The site of the old concentration camp is nothing but a barren patch of scrub desert now. It is cold there. Nasty, horrible biting cold. In the winter the wind rips right through you. I can’t even imagine living in a government supplied shack during a winter there. You stand in the middle of this barren patch of sand, and the realization hits you that our government imprisoned innocent Americans here, it punches you in the gut. We did this thing, and it was evil.

If Newt was really a conservative, and he’s as educated and intelligent as he says he is, then there is no way that he would say FDR was a great, let alone the greatest, president.

Franklin Delano Roosevelt (Teddy Roosevelt’s cousin) was a product of the philosophy of his time. The traditional American idea was that people own the government. FDR believed that the government owns the people. FDR’s fundamental beliefs are the antithesis of what made America great.

*A Square Deal in a Round Hole

Did Obama Give Anti-Free Market Speech at Osawatomie for Communist Connection?

Newt Gingrich and “the vision thing”

Michael Savage Offers Newt $1M to Drop Out of Race

I am a babyboomer and empty nester who savors every moment of my past and believes that it is the responsibility of each of us in my generation and Americans in general to make sure that America is as good or even a better place for future generations as it was for us. So far... we haven't done very well!! Favorite Quotes: "The first 50 years are to build and acquire; the second 50 are to leave your legacy"; "Do something that scares you every day!"; "The journey in between what you once were and who you are becoming is where the dance of life really takes place". At age 62 I find myself fighting inoperable uterine Cancer and thanks to the man upstairs and the prayers from so many people including many of my readers from AskMarion and JustOneMorePet... I'm beating it. After losing our business because of the economy and factors related to the re-election of President Obama in 2012 followed by 16-mos of job hunting, my architect-trained husband is working as a trucker and has only been home approximately 5-days a month since I was diagnosed, which has made everything more difficult and often lonely... plus funds are tight. Our family medical deductible is 12K per year for two of us; thank you ObamaCare. But thanks to donations from so many of you, we are making ends meet as I go through treatment while taking care of my father-in-law who is suffering from late stage Alzheimer's and my mother-in-law who suffers from RA and onset dementia as well as hearing loss, for which there are no caretaker funds, as I continue the fight here online to inform and help restore our amazing country. And finally I need to thank a core group of family, friends, and readers... all at a distance, who check in with me regularly. Plus, I must thank my furkids who have not left my side through this fight. You can see them at JustOneMorePet.
View all posts by Ask Marion →
This entry was posted in Dumbing Down of America, Freedom, Knowledge Is Power, News and politics, Patriotism, Politics, Wake Up, Watch the Other Hand and tagged Big Labor, concentration camps, educate yourself, FDR, Franklin Delano Roosevelt, History, Newt Gingrich, Obamaland, Progressive agenda, Progressive Movement, re-writing history, Teddy Roosevelt, The Roosevelts, TR, unions. Bookmark the permalink.