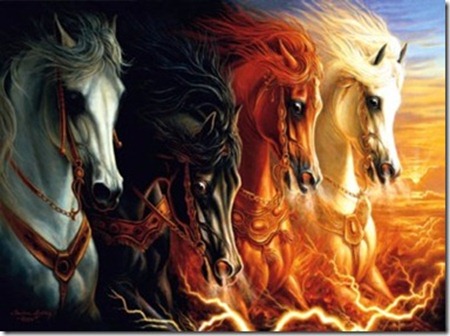 I can’t take it any more. Did someone order an apocalypse? I know there is always one bearing down on us somewhere, but come on! Have you read the headlines lately? By Friday of last week, I was ready for a major meltdown. Looks like I wasn’t the only one:

GBTV Video on site. Or… Here

Video on site or Here

Oh, how I can relate. (Massive screaming and hair pulling.) What the hell is wrong with us? Everything is upside down and backwards. Just the highlights:

1. Europe is melting down and about to fall into a black hole of debt which will draw us into the whirlpool right along with them. No one seems to really want to control their spending. It’s like the elite are paying all their crony friends, providing for themselves and knowingly bringing on the destruction of finances planet-wide. Screw the common man – they are taking the system for all it’s worth and then getting out before the implosion hits.

2. Our government — in secret — gave out 7.7 Trillion dollars worth of bailout money to banks – worldwide. Where the hell did they get it? I suspect, they just ‘digitized’ it and spread it around. It made NO difference, just forestalled the inevitable implosion. See #1 above. Say it with me: Weimar Republic.

3. Any time now, the Middle East is going to blow up and hello $200 a barrel for oil. It could be Iran and Israel (or Iran and us). It could be Syria. Hell, it could be Pakistan. WWIII is about to announce itself on the global stage and I’m not convinced we’ll be on the right side of the fight.

4. The minority inmates of the asylum are in control of our country, all the while claiming they are the 99%. (Really, does anyone in government look like a 99 percenter?)

5. Communism never went away… It has surged back thanks to the Progressives putting their comrades in positions of power throughout our nation. The red menace is back baby and it is within our own walls and halls, not to mention spreading across the globe again.

6. Hyperinflation is on it’s way as the world prints money trying to stave off a global depression. Never worked before, won’t work this time. Don’t these idiots ever learn?

7. Our government has gone rogue. They no longer fear having to pay for any transgressions from insider trading to falsifying testimony on things like, oh, I don’t know, running guns to Mexico. There are soooo many corrupt issues in our government these days, I just don’t even know where to start. Get rid of all of ‘em and start over.

9. Regulations out the wazoo. It’s Atlas Shrugged come to life. We literally can’t breath without violating one law or another.

10. God is being removed systematically from every part of our society. In it’s place, some of the most violent and horrific examples of barbarism are taking place right here in America and elsewhere that I have ever seen.

11. Antisemitism is raising is ghastly head once more. Those that stand against God’s chosen ones will surely fall from grace. Count on it.

12. The Constitution is being utterly ignored and circumvented by our politicians and elite Progressives on both sides of the aisle. I’ve just about had all I can take from these politicians. We must restore the original intent of the Constitution and the ideals our founders based this country on or we are toast.

And speaking of our current economic and political situation, this episode was badly written:

What’s happened to personal responsibility? What’s happened to independence and innovation? Where are morals and ethics any more? Maybe they are all still there, it’s just that the minority is in control and they have the morals of an alley cat and the ethics of, well, a politician. In fact, many of them are politicians. Isn’t it time America put people of character back in control of our homeland? Isn’t it time for the majority to say that’s enough, we aren’t going to take this crap any more? I really, really think so.

Can you blame people for panicking? Can you blame them for storing food, paying off debt and moving to a state that has some sanity left? Gun sales are the highest they have ever been and I personally believe that it has everything to do with what is happening in our country and worldwide today. No longer are survivalists being called crazy, everyone is at least attempting to prep. I’d say if you just read the headlines, you can’t help but think things are trending darkly – Apocalypse Nowish.

I am a babyboomer and empty nester who savors every moment of my past and believes that it is the responsibility of each of us in my generation and Americans in general to make sure that America is as good or even a better place for future generations as it was for us. So far... we haven't done very well!! Favorite Quotes: "The first 50 years are to build and acquire; the second 50 are to leave your legacy"; "Do something that scares you every day!"; "The journey in between what you once were and who you are becoming is where the dance of life really takes place". At age 62 I find myself fighting inoperable uterine Cancer and thanks to the man upstairs and the prayers from so many people including many of my readers from AskMarion and JustOneMorePet... I'm beating it. After losing our business because of the economy and factors related to the re-election of President Obama in 2012 followed by 16-mos of job hunting, my architect-trained husband is working as a trucker and has only been home approximately 5-days a month since I was diagnosed, which has made everything more difficult and often lonely... plus funds are tight. Our family medical deductible is 12K per year for two of us; thank you ObamaCare. But thanks to donations from so many of you, we are making ends meet as I go through treatment while taking care of my father-in-law who is suffering from late stage Alzheimer's and my mother-in-law who suffers from RA and onset dementia as well as hearing loss, for which there are no caretaker funds, as I continue the fight here online to inform and help restore our amazing country. And finally I need to thank a core group of family, friends, and readers... all at a distance, who check in with me regularly. Plus, I must thank my furkids who have not left my side through this fight. You can see them at JustOneMorePet.
View all posts by Ask Marion →
This entry was posted in Changing Winds, Economy and Money, Freedom, Knowledge Is Power, Off the Grid, Patriotism, Politics, Self-Reliance, Preparedness and Survival, Spirituality, Wake Up, Watch the Other Hand and tagged Apocalypse, Constitution, economic collapse, financial crisis, Glenn Beck, God, guns, Iran, Israel, meltdown, Middle East, morality, preparedness, Progressives, survivalists, the 99 Percent, Wall Street. Bookmark the permalink.