Rick Perry – Lies About Dying Woman and His HPV Decisions 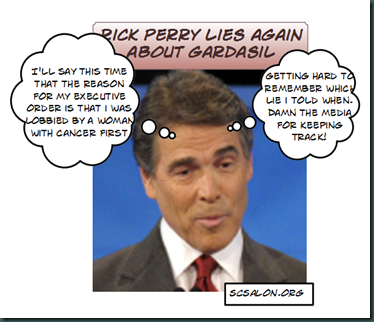 In the latest GOP debate Rick Perry offered up yet ANOTHER lie to justify his Gardasil mandate. I had to shake my head when I heard this…

First, remember the LAST time he lied about this? At the CNN *debate*.

Last night, when asked about the Gardasil mandate, Perry said he was *lobbied* on HPV vaccine, by a woman with cancer.

from the Fox transcript:

Congresswoman Bachmann, in the last debate you criticized Governor Perry for his executive order mandating that 6th graders get the HPV vaccine to prevent cervical cancer. Then afterward, you suggested that the vaccine was linked to mental retardation and you said that it could be, quote, “potentially be a very dangerous drug.”

But the American Academy of Pediatrics has looked at it and says that the HPV vaccine has an excellent safety record. So my question to you is, do you stand by your statement that the HPV vaccine is potentially dangerous? And if not, should you be more careful when you’re talking about public health issue?

BACHMANN: Well, first I didn’t make that claim nor did I make that statement. Immediately after the debate, a mother came up to me and she was visibly shaken and heart broken because of what her daughter had gone through. I so I only related what her story was.

But here’s the real issue, Governor Perry mandated a health care decision on all 12-year-old little girls in the state of Texas. And by that mandate, those girls had to have a shot for a sexually transmitted disease. That is not appropriate to be a decision that a governor makes.

It is appropriate that parents make that decision in consultation with their doctor.

But here’s the even more important point, because Governor Perry made a decision where he gave parental rights to a big drug company.

That’s what was wrong with that picture.

I got lobbied on this issue. I got lobbied by a 31-year-old young lady who had stage 4 cervical cancer. I spent a lot of time with her.

She came by my office talked to me about in program.

I readily admitted we should have had an opt-in, in this program.

No.  he befriended that dying woman AFTER his mandate.

Perry and Burcham, a teacher from Houston, Texas, struck up an unusual friendship in the months after he issued his executive order. While the Texas legislature was working to revoke the mandate, Burcham traveled to Austin to testify about her personal experience with cervical cancer and how the HPV vaccine might help spare other young women from suffering a fate similar to her own.

And have to say, trying to shift this to opt-in versus opt-out is simply NOT the issue. It is that Rick Perry, to suck up to Merck, issued an EXECUTIVE ORDER to force this shot on 12 year old girls, side-stepping the Texas legislature. He did not do it because of a 31 year old woman with cancer, whom he didn’t meet until AFTER he had been STOPPED and was trying to do save face PR.

It’s like Rick Perry is trying to float which excuse to use today that people may buy.

Photo Courtesy of the Wilson family

Although Rick Perry said at a debate on Thursday that he was “lobbied” by a 31-year-old woman suffering from cervical cancer to require young girls to receive the HPV vaccine, he did not meet the cancer patient until after he had already issued his executive order mandating the vaccine.

It was a rhetorical high point for Perry at the debate in Florida, when he put a personal face on the story and pointed to his friendship with a woman who later died of cervical cancer.

“I got lobbied on this issue. I got lobbied by a 31 year old young lady who had stage 4 cervical cancer,” said Perry. “I spent a lot of time with her.  She came by my office  She talked to me about this program.   I readily admitted we should have had an opt-in but I don’t know what part of opt out most parents don’t get and the fact is I erred on the side of life and I will always err on the side of life as a governor as a president of the United States.”

The woman Rick Perry mentioned in the Republican debate Thursday was Heather Burcham, a thirty one year old woman dying from cervical cancer. But what Perry left out in his answer was that he met her after he issued his executive order.

Perry issued the executive order requiring sixth grade girls receive the HPV vaccine in early February of 2007, and he met Burcham while she was lobbying the Texas legislature to uphold the governor’s executive order. The legislature ultimately ruled against Burcham and Perry and did away with the vaccine mandate.

As first reported by KTRK’s Ted Oberg, the pair struck up a friendship despite the Texas legislature revoking the governor’s mandate.  Perry invited Burcham to a ranch, rode motorcycles with her and even sat at her bed during her final days.  Burcham died in July 2007.

Perry has often referred to Burcham on the campaign trail, saying recently he sat at the bedside of a dying woman with cervical cancer.

The Texas governor spoke at her memorial service in July 2007, saying it was a missed opportunity for the Texas legislature to not uphold his executive order.

“Though some could not see the benefits of the HPV vaccine through the prism of politics, some day they will,” Perry said in July 2007. “Someday they will recognize that this could happen to anyone’s daughter, even their own. Someday they will respond with compassion when they once responded with ignorance. And, someday, they will come to a place where they recognize the paramount issue is whether we will choose life, and protect life, without regard to what mistakes, if any, have been made in the past.”

Perry has endured a lot of criticism from fellow Republicans on the issue, particularly Minnesota Rep. Michele Bachmann and former Pennsylvania Sen. Rick Santorum, who have argued the government should not force parents to inoculate their children against what is essentially a sexually transmitted disease, even if it cuts down on instances of cervical cancer.

Gardasil – If A Picture is Worth A Thousand Words, Then A Video Report, Or Two, Or Three, or SEVEN…

On H.P.V Vaccine, Palin’s First Overt Attach on Perry

I am a babyboomer and empty nester who savors every moment of my past and believes that it is the responsibility of each of us in my generation and Americans in general to make sure that America is as good or even a better place for future generations as it was for us. So far... we haven't done very well!! Favorite Quotes: "The first 50 years are to build and acquire; the second 50 are to leave your legacy"; "Do something that scares you every day!"; "The journey in between what you once were and who you are becoming is where the dance of life really takes place". At age 62 I find myself fighting inoperable uterine Cancer and thanks to the man upstairs and the prayers from so many people including many of my readers from AskMarion and JustOneMorePet... I'm beating it. After losing our business because of the economy and factors related to the re-election of President Obama in 2012 followed by 16-mos of job hunting, my architect-trained husband is working as a trucker and has only been home approximately 5-days a month since I was diagnosed, which has made everything more difficult and often lonely... plus funds are tight. Our family medical deductible is 12K per year for two of us; thank you ObamaCare. But thanks to donations from so many of you, we are making ends meet as I go through treatment while taking care of my father-in-law who is suffering from late stage Alzheimer's and my mother-in-law who suffers from RA and onset dementia as well as hearing loss, for which there are no caretaker funds, as I continue the fight here online to inform and help restore our amazing country. And finally I need to thank a core group of family, friends, and readers... all at a distance, who check in with me regularly. Plus, I must thank my furkids who have not left my side through this fight. You can see them at JustOneMorePet.
View all posts by Ask Marion →
This entry was posted in Health and wellness, News and politics, Politics, Wake Up, Watch the Other Hand and tagged 2012 Election, Big Goverment, Big Pharma, Cancer, Election 2012, EO's, Executive Orders, Gardasil, GOP Candidates, HPV, Rick Perry, Texas. Bookmark the permalink.