Tapes recorded by the First Lady months after the President’s death were released ahead of schedule by her daughter Caroline.

In the tapes, broadcasted by ABC, Kennedy reveals her belief that Johnson and a cabal of Texas tycoons orchestrated the murder of her husband by gunman Lee Harvey Oswald.

Kennedy, who later became Jackie Onassis, claims on the tapes that the Dallas murder was part of a larger conspiracy to allow Johnson to become American President in his own right.

Johnson, who served as state governor and senator for Texas, completed Kennedy’s term after the assassination and went on to be elected president.

They were stored in a sealed vault at the Kennedy Library in Boston per orders from Mrs Kennedy that they would remain secret for 50 years after her death.

17 years after her mother died from cancer, daughter Caroline opted to release the tapes early.

She entered an agreement with the ABC network in the States to air the tapes after agreeing to cancel Their Kennedys drama mini-series which upset Caroline and the Kennedy family.

The $10 million series starred Tom Cruise’s wife Kate Holmes as Jackie Kennedy and critically charted the family’s political and personal trials and tribulations since the 1930s. Although the mini-series was dropped in the deal with Caroline as part of the deal for these tapes, it was ultimately picked up by REELZ cable network; definitely worth the watch!!

ABC executives confirmed that the revelations in the tapes are ‘explosive’ with Jackie Kennedy allegedly blaming President Lyndon Johnson for the death of JFK, but the MSM media and the powers that be seemed to bury the story.

The tapes also include the suggestion that President Kennedy was having an affair with a 19-year-old White House intern. Jackie even claimed that she found underwear in their bedroom. 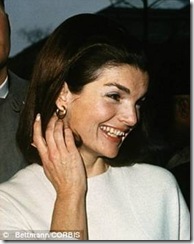 Jackie Kennedy also admits to several affairs of her own in the tapes – one with Hollywood star William Holden and another with Fiat founder Gianni Agnelli – in  retaliation for the President’s indiscretions.

Yet there are also claims that the couple had discussed having more children in the weeks before his death and that their marriage was at a high point.

Noted Kennedy family historian and author Edward Klein said: “Jackie regarded the pretty young things in the White House as superficial flings for Jack, but she did retaliate by having her own affairs.

“There was a period during which she was delighted to be able to annoy her husband with her own illicit romances.” It was reported that more than once JFK sent out the Secret Service to bring Jackie home, including off her future husband, Ari Onassis’, boat.

The Kennedy Assassination was probably the first time that the people of America really took a good hard look at things that just didn’t make sense.  It was the first modern day conspiracy that played itself out on television and woke a few people up!  Just because something is a conspiracy does not mean that it is a theory or that it isn’t true!!  Who was behind the assassination of John F. Kennedy followed by Robert F. Kennedy and Martin Luther King have been speculation and secrets for 50 years now…  Will “they” ever let the truth be known?

There is more than one theory as to who is responsible for the murder of JFK… Lyndon Johnson, the Cabal of International Bankers who control the Federal Reserve and the monetary system worldwide, the Mossad (Israeli Intelligence), the Mob plus a few others.  But pretty much everyone who knows the story or lived through it knows it wasn’t Lee Harvey Oswald.  But if Jackie felt it was their VP Lyndon Johnson there must something to that!

The amazing thing is that there have been conspiracies since and are conspiracies even bigger being played out in front of our faces right now before our eyes… that we just continue to ignore.  Why?  That is the million… er uh the $16 trillion dollar question, now isn’t it?!?

Who Killed the Kennedys?  – Some Great Links and Resources

The Man Who Killed Kennedy: The Case Against LBJ (Kindle)

I am a babyboomer and empty nester who savors every moment of my past and believes that it is the responsibility of each of us in my generation and Americans in general to make sure that America is as good or even a better place for future generations as it was for us. So far... we haven't done very well!! Favorite Quotes: "The first 50 years are to build and acquire; the second 50 are to leave your legacy"; "Do something that scares you every day!"; "The journey in between what you once were and who you are becoming is where the dance of life really takes place". At age 62 I find myself fighting inoperable uterine Cancer and thanks to the man upstairs and the prayers from so many people including many of my readers from AskMarion and JustOneMorePet... I'm beating it. After losing our business because of the economy and factors related to the re-election of President Obama in 2012 followed by 16-mos of job hunting, my architect-trained husband is working as a trucker and has only been home approximately 5-days a month since I was diagnosed, which has made everything more difficult and often lonely... plus funds are tight. Our family medical deductible is 12K per year for two of us; thank you ObamaCare. But thanks to donations from so many of you, we are making ends meet as I go through treatment while taking care of my father-in-law who is suffering from late stage Alzheimer's and my mother-in-law who suffers from RA and onset dementia as well as hearing loss, for which there are no caretaker funds, as I continue the fight here online to inform and help restore our amazing country. And finally I need to thank a core group of family, friends, and readers... all at a distance, who check in with me regularly. Plus, I must thank my furkids who have not left my side through this fight. You can see them at JustOneMorePet.
View all posts by Ask Marion →
This entry was posted in History, Knowledge Is Power, Politics, Remembering, Watch the Other Hand, You Be the Judge and tagged Caroline Kennedy, conspiracies, Federal Reserve, former presidents, History, Jackie Kennedy, JFK, John F. Kennedy, LBJ, Lyndon B. Johnson, manipulation of the public, MLK, remembering, RFK, Robert F. Kennedy. Martin Luther King Jr, The Kennedys. Bookmark the permalink.