Conservatives are patriotic Americans, liberals are not…

This will not come as a shock to people in the Tea Party movement.  Conservatives are patriotic, liberals are not.  This is not just a saying we have in the conservative movement.  We now have proof!

What is the proof?

From Harvard University via US News and World Report.

“Fourth of July celebrations in the United States shape the nation’s political landscape by forming beliefs and increasing participation, primarily in favor of the Republican Party,” said the report from Harvard. [See political cartoons about the 2012 GOP field.]

“The political right has been more successful in appropriating American patriotism and its symbols during the 20th century. Survey evidence also confirms that Republicans consider themselves more patriotic than Democrats. According to this interpretation, there is a political congruence between the patriotism promoted on Fourth of July and the values associated with the Republican party. Fourth of July celebrations in Republican dominated counties may thus be more politically biased events that socialize children into Republicans,” write Harvard Kennedy School Assistant Professor David Yanagizawa-Drott and Bocconi University Assistant Professor Andreas Madestam.

Their findings also suggest that Democrats gain nothing from July 4th parades, likely a shocking result for all the Democratic politicians who march in them.

This is something any conservative could have told Harvard.  Liberals are not patriots.  Liberals do not love this country.  Liberals think America is the focus of evil in the modern world, not the greatest nation on the face of the world.

The good news in that study is if you take kids to Fourth of July parades, they are much more likely to grow up conservative, support conservative causes and vote for conservative candidates. 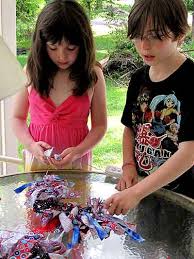 Taking traditional celebrations that build common values and patriotism out of the schools is part of the liberal plan… has been for years!

Our Flag Is Gone… Have You Noticed?

I am a babyboomer and empty nester who savors every moment of my past and believes that it is the responsibility of each of us in my generation and Americans in general to make sure that America is as good or even a better place for future generations as it was for us. So far... we haven't done very well!! Favorite Quotes: "The first 50 years are to build and acquire; the second 50 are to leave your legacy"; "Do something that scares you every day!"; "The journey in between what you once were and who you are becoming is where the dance of life really takes place". At age 62 I find myself fighting inoperable uterine Cancer and thanks to the man upstairs and the prayers from so many people including many of my readers from AskMarion and JustOneMorePet... I'm beating it. After losing our business because of the economy and factors related to the re-election of President Obama in 2012 followed by 16-mos of job hunting, my architect-trained husband is working as a trucker and has only been home approximately 5-days a month since I was diagnosed, which has made everything more difficult and often lonely... plus funds are tight. Our family medical deductible is 12K per year for two of us; thank you ObamaCare. But thanks to donations from so many of you, we are making ends meet as I go through treatment while taking care of my father-in-law who is suffering from late stage Alzheimer's and my mother-in-law who suffers from RA and onset dementia as well as hearing loss, for which there are no caretaker funds, as I continue the fight here online to inform and help restore our amazing country. And finally I need to thank a core group of family, friends, and readers... all at a distance, who check in with me regularly. Plus, I must thank my furkids who have not left my side through this fight. You can see them at JustOneMorePet.
View all posts by Ask Marion →
This entry was posted in Events, Family and Friends, Freedom, Fun, Holidays, Knowledge Is Power, Patriotism, Politics, Tradition and tagged 4th of July, Conservatives, conservatives vs. liberals, education, education through action, flag, GOP, Harvard, History, old glory, stars and stripes, studies, values. Bookmark the permalink.

4 Responses to Conservatives are patriotic Americans, liberals are not…