By: Terresa Monroe-Hamilton at the Noisy Room, 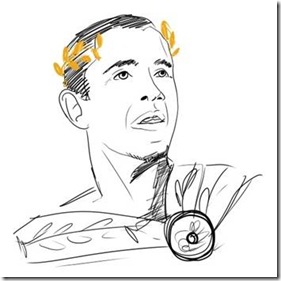 The Apotheosis Of Barack Obama

While all of America is distracted and focused on the death of Osama bin Laden, our President and his minions have been fast at work laying the groundwork for S. 679: Presidential Appointment Efficiency and Streamlining Act of 2011 to speed through the Senate and then make its way into the House and then to the President to sign. Yes, the other hand is quickly forming into a dictatorial fist that is about to smash our Constitution.

As you will recall, the beginning of the end of liberty in Rome commenced with Augustus Caesar who compromised the authority of the Senate through the force of arms and basically the Senate became a facade. America is poised with this proposed bill, to morph immediately from a Republic into an empire with the privileged eunuchs of the Senate as window dressing and a dictator – the first American Caesar – at the country’s helm.

And leading the progressive charge is Chuck Schumer (D-NY). No big surprise there. Schumer is an elitist Marxist and a first class progressive who hates America almost as much as he loves power. He introduced S. 679 on March 30th, 2011. He was joined by a gaggle of progressives from the left and the right. This is something I have been warning Americans about for a long time. If we are to survive as a nation, we must rid ourselves of ALL progressives or our nation is doomed and freedom will be swept into the dustbin of history. Schumer’s esteemed list of constitutional traitors is as follows:

From The Heritage Foundation, here is a succinct explanation of the bill:

The bill reduces the number of presidential appointments that require the consent of the Senate and establishes within the executive branch a Working Group on Streamlining Paperwork for Executive Nominations. Individuals nominated to senior executive offices suffer slow and detailed background investigations and mounds of duplicative paperwork before a President sends their nominations to the Senate. After nomination, many nominees suffer time-consuming inaction or time-consuming and excruciating action as the Senate proceeds (or does not) with consideration of the nomination. The sponsors of S. 679 have identified a valid problem, but proposed the wrong solution. Congress should not enact S. 679.

In essence they want to give the President the sole power to appoint people to positions of his choosing within our government. Obama would be free to do this without the approval of the Senate. Senate approval of such positions is mandated by the U.S. Constitution in Article II, Section 2 under the “Appointments Clause”:

… shall nominate, and by and with the Advice and Consent of the Senate, shall appoint Ambassadors, other public Ministers and Consuls, Judges of the supreme Court, and all other Officers of the United States, whose Appointments are not herein otherwise provided for, and which shall be established by Law: but the Congress may by Law vest the Appointment of such inferior Officers, as they think proper, in the President alone, in the Courts of Law, or in the Heads of Departments. (emphasis added)

This bill will do away with the checks and balances that separate an American form of government from those such as Venezuela and Brazil. Already we have power mongers such as Cass Sunstein our Regulatory Czar (more commonly known as the Office of Information and Regulatory Affairs and more aptly titled the Office of Government Propaganda) running amok across the US using agencies such as the EPA as a weapon of regulation and control. There is not a single area in our country that Sunstein does not have his claws sunk deep into. It should scare the crap out of Americans, but all I hear are crickets. The silence of capitulation seals our fate as surely as the thunderous applause of approval – so ends the Republic.

More from The Heritage Foundation:

When the delegates of the states gathered in Philadelphia in the summer of 1787 and wrote the Constitution, they distributed the powers of the federal government among two Houses of Congress, a President, and a judiciary, and required in many cases that two of them work together to exercise a particular constitutional power. That separation of powers protects the liberties of the American people by preventing any one officer of the government from aggregating too much power.

I know Americans have not forgotten about Obama’s string of Czars. Czars that he was supposed to downsize or get rid of. Czars, which in my personal viewpoint, were and still are illegal under the Constitution. But progressives never go away, they just shift… As has done so many of Obama’s Czars. With this sweeping bill, over 200 positions will no longer require Senate approval. Obama will dictate who are his powerful lieutenants and who will control America. The Senate will merely be a sham to parrot Obama’s dictates. With this bill, checks and balances will be effectively nullified.

What does that portend you say? One day, your right to own a gun will be gone, just regulated away. Businesses will be nationalized even more than they are now. Heavy regulation will ensue concerning communications and the Internet. Many, many private businesses will whither and die. You will be told what and how much to eat – food and gas rationing will become the norm. Poverty and squalor will become equal for all as wealth is redistributed to other nations. If there are elections, they will be a joke and pointless. There will be a few powerful elites and then the masses. Guess which camp you and I will be in?

Our best hope at this juncture is that this abomination will be stopped in the House. We must weed out the progressives and we must win in 2012. This country will not survive another four years of progressive policies. Not as a Republic and not as a free entity anyway.

The bitter irony on display here, is that the same jackals that have barked and snarled and feigned horror at “American Imperialism,” are the very ones who now howl their support for a true American empire. All hail Caesar!

Why Don’t We Hear ABout Soros’ Ties to Over 30 Major News Organizations?

I am a babyboomer and empty nester who savors every moment of my past and believes that it is the responsibility of each of us in my generation and Americans in general to make sure that America is as good or even a better place for future generations as it was for us. So far... we haven't done very well!! Favorite Quotes: "The first 50 years are to build and acquire; the second 50 are to leave your legacy"; "Do something that scares you every day!"; "The journey in between what you once were and who you are becoming is where the dance of life really takes place". At age 62 I find myself fighting inoperable uterine Cancer and thanks to the man upstairs and the prayers from so many people including many of my readers from AskMarion and JustOneMorePet... I'm beating it. After losing our business because of the economy and factors related to the re-election of President Obama in 2012 followed by 16-mos of job hunting, my architect-trained husband is working as a trucker and has only been home approximately 5-days a month since I was diagnosed, which has made everything more difficult and often lonely... plus funds are tight. Our family medical deductible is 12K per year for two of us; thank you ObamaCare. But thanks to donations from so many of you, we are making ends meet as I go through treatment while taking care of my father-in-law who is suffering from late stage Alzheimer's and my mother-in-law who suffers from RA and onset dementia as well as hearing loss, for which there are no caretaker funds, as I continue the fight here online to inform and help restore our amazing country. And finally I need to thank a core group of family, friends, and readers... all at a distance, who check in with me regularly. Plus, I must thank my furkids who have not left my side through this fight. You can see them at JustOneMorePet.
View all posts by Ask Marion →
This entry was posted in Changing Winds, Freedom, Knowledge Is Power, News and politics, Off the Grid, Patriotism, Politics, Self-Reliance, Preparedness and Survival, Strength, Wake Up, Watch the Other Hand and tagged Bill of Rights, Caesar, Constitution, destractions, dictatorship, FEMA, George Soros, manipulation of the public, Obamaland, Soros. Bookmark the permalink.