Understanding Earthquakes and Their Impacts: Part I 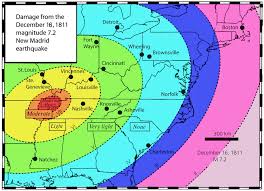 Understanding Earthquakes and Their Impacts: Part I – And Why the U.S. Government Might Be Issuing This…
Posted by Tammy Dickinson and David Applegate on May 10, 2011 at 10:46 AM EDT

Ed. Note: This is the first of a two-part blog focusing on the science and aftermath of earthquakes. Part I focuses on the science of a high-magnitude earthquake and whether one could happen in the United States. Tomorrow, Part II will focus on What We Can Do About It.

Four deadly earthquakes in just over a year—Haiti, Chile, New Zealand, and now Japan—have provided sudden reminders of the tectonic forces active beneath our feet. Perhaps more importantly, they serve as reminders that disasters resulting from those earthquakes are not the work of nature alone. Even in the face of such giant forces, societal decisions before and after an earthquake can have a major impact on the amount of damage, lives lost, and other outcomes. So while scientists and engineers share in society’s obligation to help the victims, we have an additional responsibility to learn from these events and share lessons that can be applied to vulnerable communities—not only abroad, but also here in the United States.

To make those wise decisions requires some basic geology. Most people know that the crust of the Earth is broken into about a dozen major sections, or plates, (and a number of smaller ones) that slowly move against one another. And when plates collide, the rock material in the collision zone is strained and eventually either breaks or slips along the boundary, causing an earthquake. Less widely appreciated is that the largest earthquakes occur along plate boundary zones where one plate is driven down beneath another. Most of these “subduction zones” are located around the rim of the Pacific Ocean in what is known as the Ring of Fire, so called because these regions are also particularly prone to volcanic eruptions.

As it turns out, Japan sits on or near the intersection of four of these plates, with the ensuing high risk from earthquakes and volcanoes. The magnitude-9.0 earthquake that occurred on March 11, 2011, was the largest to have struck Japan since seismic recording began 130 years ago and was the fourth-largest earthquake ever recorded worldwide, releasing approximately 1,000 times the energy of the Haiti earthquake of January 2010. In that light it is remarkable that the damage and loss of life was not far greater than it was—a tribute to Japan’s sizable and science-based investments in strict building codes, public preparedness, and earthquake and tsunami early warning systems. In particular, the current estimates of lives lost just from the shaking of this giant earthquake number in the low hundreds. More on this in Part Two of this blog, which we’ll post tomorrow. But it’s important to remember that even as nations begin the humbling process of rethinking certain assumptions about earthquake potential, nuclear safety, and tsunami protection, we must also use the lessons of what went right to redouble ongoing efforts to build resilient communities.

Is this really a problem that the United States has to worry about? The short answer is yes. According to the U.S. Geological Survey, 39 U.S. states have moderate-to-high earthquake hazard, as well as Puerto Rico, the U.S. Virgin Islands, Guam, and the Marianas Islands. These states include the ones people think of along the West Coast, but also ones in the Mountain West, the Central United States (where we are this year commemorating the bicentennial of a series of magnitude-7 earthquakes that struck the Mississippi Valley in 1811-12), and the East, where magnitude-7 earthquakes have struck as recently as the 1880s. Over all, annualized earthquake losses in the U.S. are estimated at $5.3 billion.

That figure could be dwarfed, of course, in the event of a magnitude-9 earthquake. And while the exact location, timing, or intensity of earthquakes cannot be predicted, the U.S. West Coast has two subduction zones—the type of plate boundary that is off the coast of Honshu, Japan—capable of magnitude-9 earthquakes. One is offshore of southern Alaska and the other is offshore a length of the Pacific Northwest coast stretching from Vancouver, BC, to Northern California—a region known as “Cascadia.” Earthquakes in southern Alaska produced major tsunamis in 1946, 1957, 1964, and 1965. The Cascadia zone last ruptured in 1700 and has an average recurrence interval of 500-600 years. The subduction zone in the eastern Caribbean has generated magnitude-8 earthquakes as recently as 1946. The 30-year probability of a magnitude-7 or greater earthquake in California is 94%, a number that fortunately drops to 4% for magnitude-8 or greater. Clearly, when it comes to a giant U.S. temblor, it is not a question of “if” but of “when.”

Tomorrow: What We Can Do About It

Pressure is building on the North American plate beyond the rocky mountain continental divide. As far north as the Cascadia range in the Pacific Northwest, south east to Yellowstone, then further south east to Georgia, up north to Montreal / New York …

The Yellowstone Caldera is the volcanic caldera located in Yellowstone National Park in the United States, sometimes referred to as the Yellowstone Supervolcano. The caldera is located in the northwest corner of Wyoming, in which the vast majority of the park is contained. The major features of the caldera measure about 34 miles (55 km) by 45 miles (72 km)[3] Much of the information on the Yellowstone Caldera and the monitoring of the bulge has been removed from the Internet, so the question we must be asking is, “What in the World is Happening There?”

“The threat of a new Madrid earthquake, in my opinion, goes up ANOTHER notch, with the signs of more activity in the north east, extending along the faults down to Arkansas.” said Dutch of Dutchsinse

The New Madrid Seismic Zone (pronounced /njuː ˈmædrɨd/), sometimes called the New Madrid Fault Line, is a major seismic zone and a prolific source of intraplate earthquakes (earthquakes within a tectonic plate) in the southern and midwestern United States, stretching to the southwest from New Madrid, Missouri.

The New Madrid fault system was responsible for the 1811–1812 New Madrid earthquakes and may have the potential to produce large earthquakes in the future. Since 1812 frequent smaller earthquakes were recorded in the area.[1]

Is the New Madrid Fault Earthquake Zone Coming to Life?

Expect anywhere along a plate boundary and anywhere there are active volcanoes to experience 5.0 quakes and greater for the next 2 weeks or more.

Asia, the threat extends from the India Russia border (central India) south east to Australia, and bending around the Australian continent down to the south pole, right through New Zealand, and branching north up to the hot spot of japan.

Japan still is due for a VERY large quake.. in the 8.0+ range within the next 2 weeks.

I am a babyboomer and empty nester who savors every moment of my past and believes that it is the responsibility of each of us in my generation and Americans in general to make sure that America is as good or even a better place for future generations as it was for us. So far... we haven't done very well!! Favorite Quotes: "The first 50 years are to build and acquire; the second 50 are to leave your legacy"; "Do something that scares you every day!"; "The journey in between what you once were and who you are becoming is where the dance of life really takes place". At age 62 I find myself fighting inoperable uterine Cancer and thanks to the man upstairs and the prayers from so many people including many of my readers from AskMarion and JustOneMorePet... I'm beating it. After losing our business because of the economy and factors related to the re-election of President Obama in 2012 followed by 16-mos of job hunting, my architect-trained husband is working as a trucker and has only been home approximately 5-days a month since I was diagnosed, which has made everything more difficult and often lonely... plus funds are tight. Our family medical deductible is 12K per year for two of us; thank you ObamaCare. But thanks to donations from so many of you, we are making ends meet as I go through treatment while taking care of my father-in-law who is suffering from late stage Alzheimer's and my mother-in-law who suffers from RA and onset dementia as well as hearing loss, for which there are no caretaker funds, as I continue the fight here online to inform and help restore our amazing country. And finally I need to thank a core group of family, friends, and readers... all at a distance, who check in with me regularly. Plus, I must thank my furkids who have not left my side through this fight. You can see them at JustOneMorePet.
View all posts by Ask Marion →
This entry was posted in Knowledge Is Power, Self-Reliance, Preparedness and Survival, Strength and tagged chaos, earthquakes, Japan, natural disasters, Nature, New Madrid Earthquake Fault, tornadoes, Yellowstone. Bookmark the permalink.

1 Response to Understanding Earthquakes and Their Impacts: Part I