Tax Day Tea Party Rallies were held all across America yesterday and today and regardless of what the mainstream media is reporting the numbers of attendees are the same if not higher than last year.  There were rallies from California to New Hampshire, Texas to Florida, the Carolinas to Oregon, Virginia to Kansas and they they featured speakers including:  Donald Trump, Rep Alan West, Herman Cain, Gov Sarah Palin, Marco Rubio, Sharron Angle, Gov Tim Pawlenty, Rep Tom McClintok, Phyllis Schlafly, Rep. Steve King, ACORN Whisleblower Anita MonCrief, Barry Goldwater Jr, JD Hayworth, Andrew Breitbart and the list goes on…

Did you know that the U.S. overpaid the United Nations last year by $286 Million Dollars?

And did you know that the GAO accidentally found $125 Billion in improper payments made by our government?

Yet… the Dems were incensed by having to reduce $38.1 Billion in Budget Cuts and by Paul Ryan’s Plan 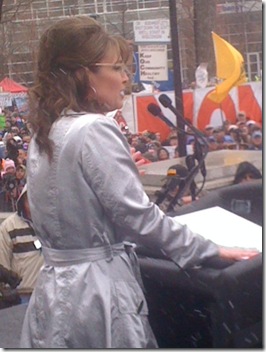 If Sarah Palin’s not running for president, what a terrible waste that would be of the single best stump speech I’ve heard since, well, Palin’s ’08 convention speech, which just happened to be the single most electrifying political moment of my adult life. A thrill didn’t just run up my leg that night, it ran up everything in me that’s American, and today in Madison, WI, it happened again. Surrounded by an obnoxiously hostile, astro-turfed, pro-union crowd that tried and failed to drown out her message with obnoxiously hostile astro-turfed noise, the former Alaskan Governor took the fight directly to the growing pile of Obama’s failures in the most effective way we’ve heard yet from a potential GOP challenger.

**  One of my favorite posters was give us a ticket of Reagan-Style patriotic Constitutionalists… How about:  Sarah Palin and Alan West?  **

Herman Cain laughs at being described as “Steve Forbes with charisma,” but finds the comparison flattering. “That’s quite a compliment.… I have the greatest amount of respect for him.”

And then there is the destructive left…  This video speaks for itself!!

Video:  “I Wipe My A** With the American Flag”:  The New Civility of the Left on Display”

(Viewer Discretion Advised) Socialist Counter Protest to Tax Day TEA Party.  This is the world that your children will inherit if these people get control!!

The President ordered the cabinet to cut a $100 million from the $3.5 trillion federal budget.

I’m so impressed by this sacrifice that I have decided to do the same thing with my personal budget. I spend about $2000 a month on groceries, household expenses, medicine, utilities, etc, but it’s time to get out the budget cutting ax, go line by line through my expenses, and cut back!

I’m going to cut my spending at exactly the same ratio – 1/35,000 of my total budget.  After doing the math, it looks like instead of spending $2000 a month; I’m going to have to cut that number by six cents!

Yes, I’m going to have to get by with $1999.94, but that’s what sacrifice is all about.  I’ll just have to do without some things, that are, frankly, luxuries. (Did Obama actually think no one would do the math?)

Give Us Liberty: A Tea Party Manifesto

I am a babyboomer and empty nester who savors every moment of my past and believes that it is the responsibility of each of us in my generation and Americans in general to make sure that America is as good or even a better place for future generations as it was for us. So far... we haven't done very well!! Favorite Quotes: "The first 50 years are to build and acquire; the second 50 are to leave your legacy"; "Do something that scares you every day!"; "The journey in between what you once were and who you are becoming is where the dance of life really takes place". At age 62 I find myself fighting inoperable uterine Cancer and thanks to the man upstairs and the prayers from so many people including many of my readers from AskMarion and JustOneMorePet... I'm beating it. After losing our business because of the economy and factors related to the re-election of President Obama in 2012 followed by 16-mos of job hunting, my architect-trained husband is working as a trucker and has only been home approximately 5-days a month since I was diagnosed, which has made everything more difficult and often lonely... plus funds are tight. Our family medical deductible is 12K per year for two of us; thank you ObamaCare. But thanks to donations from so many of you, we are making ends meet as I go through treatment while taking care of my father-in-law who is suffering from late stage Alzheimer's and my mother-in-law who suffers from RA and onset dementia as well as hearing loss, for which there are no caretaker funds, as I continue the fight here online to inform and help restore our amazing country. And finally I need to thank a core group of family, friends, and readers... all at a distance, who check in with me regularly. Plus, I must thank my furkids who have not left my side through this fight. You can see them at JustOneMorePet.
View all posts by Ask Marion →
This entry was posted in Changing Winds, Economy and Money, Freedom, Knowledge Is Power, News and politics, Patriotism, Politics, Wake Up and tagged Conservatives, economics, Election 2012, GOP, stand-up America, stop spending, taxes, tea party. Bookmark the permalink.